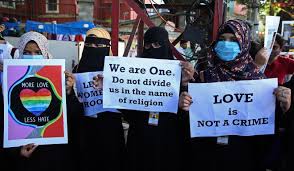 Uttar Pradesh police registered their first case under the Indian state’s controversial new law targeting what right-wing Hindu groups call the “jihad of love” – ​​a conspiracy of religious conversion presumed by Muslim men to attract Hindu women into marriage and alienate them from their faith.

The case is based on a complaint by a Bareilly resident against Uvaish Ahmad, a Muslim man, who alleged that Ahmad had been stalking his daughter for more than a year, attempting to “coerce, coax, and allure” her into converting to Islam so that he could marry her. Ahmed appeared in court and was remanded in custody for 14 days pending trial.’

The girl’s parents married her off in June, but Ahmad persisted despite the victim’s continued refusal. The father has further alleged that even after his daughter’s marriage, Ahmad continued to harass their family and escalated to making death threats. The Superintendent of Bareilly, Sansar Singh, has confirmed that police effort to apprehend the accused is ongoing.

The Uttar Pradesh Prohibition of Unlawful Conversion of Religion Ordinance, 2020 seeks to curb religious conversion only for the sake of marriage. It was cleared by the state’s Cabinet of Ministers last week and was signed by the state’s Governor Anandiben Patel on Saturday. Section 3 of the ordinance prohibits a person who: convert or attempts to convert, either directly or otherwise any other person from one religion to another by use or practice of misrepresentation, force, undue influence, coercion, allurement or by any fraudulent means or by marriage

Any person contravening Section 3 is liable to be punished with imprisonment from 1 to 5 years and a fine of up to Rs. 15, 000. The law also criminalizes the abetting, convincing, or conspiring of such conversion, punishes repeat offenders with double the punishment prescribed, and places the burden of proof on the accused.

“Love jihad” ordinance is a sarkari honour crime against inter-faith relationships. With it, the District Magistrate becomes the government-approved khap panchayat which can arbitrarily decide to separate lovers; deem a marriage illegitimate, and sentence a Muslim man to prison for 5-10 years.

There has been considerable controversy in India this year over inter-faith marriages and so-called “love-jihad”, including a backlash against the jewelry brand Tanishq for advertising an inter-faith marriage, against the Netflix series ‘A Suitable Boy’ for scenes of a Hindu girl and Muslim boy kissing in a temple, and several protests of Nikita Tomar whose family alleges she was shot for refusing to convert. Love jihad is a term coined by the political right who allege a conspiracy by Muslim men to lure women of other faiths into converting to Islam on the promise of marriage and love.

Even though the Parliament in February clarified that no love jihad cases had been reported, many state governments, including Haryana, Madhya Pradesh, Karnataka, and Assam, are currently mulling statutes against love jihad.

Loading...
Newer Post
Chadwick Boseman Will Be A Hero For The Ages At MTV Movie & TV Awards
Older Post
“Buh A A”: China Unveils Gene Technology to Create SUPER HUMANS

Biden authorises immediate US response for Haiti after 7.2 quake; death toll near 227 0