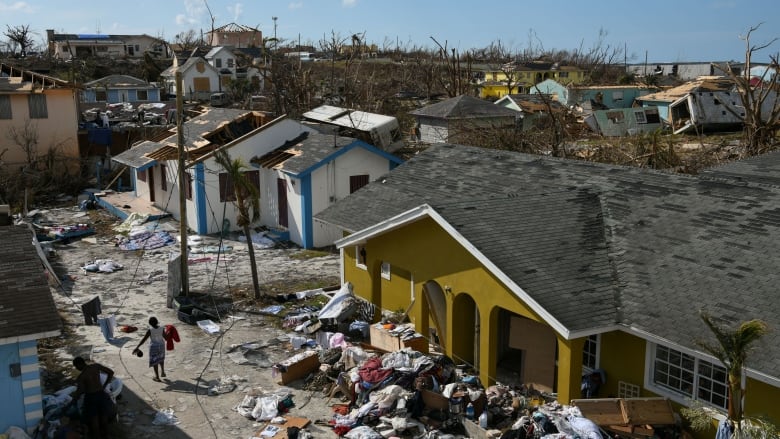 Authorities in The Bahamas are stepping up aid and relief efforts to Grand Bahama and Abaco islands and have deployed nearly 1,000 law enforcement officers to quell a spate of looting that has dampened recovery efforts in the wake of the devastation from Hurricane Dorian.

On top of all the problems associated with the destruction of Abaco and Grand Bahama and the 50 confirmed deaths so far, safety and security issues have emerged as key problems for the administration of Prime Minister Hubert Minnis.

Minnis said the deployment has become necessary and will be boosted with arrivals of troop contingents from Trinidad, Jamaica, and other Caribbean islands in the coming weeks.

But even as authorities try to step up relief and recovery efforts, larger numbers of residents are demanding assistance in abandoning the two islands because of the horrible living conditions there.

Up to Tuesday, close to 5,000 people had been evacuated to nearby New Providence and to the capital, Nassau. A few thousands more are on the waiting list.

And harking back to a bygone era, Governor General Cornelius Alvin Smith said in a national address that the hit from Dorian was the worst in both living and recorded memory for The Bahamas.

”There is no question that our people and our country, have suffered a most grievous blow at the hands of nature. We all know that from time to time throughout our history, we have had encounters with hurricanes of varying magnitudes but none like Dorian,” the Governor said. “I remember a previous generation telling stories of the great storms of 1929 and 1932 but it is painfully clear that never before have we experienced such a destructive force as hurricane Dorian.”

Much like Dorian he also said, the 1929 storm had also stalled over The Bahamas for several hours causing 48 deaths, two less than the official death toll so far. The one three years later in 1932 was a category five hurricane and killed 16 people, pointing to the archipelago’s frequent brushes and encounters with powerful storms.

As authorities prepare for more evacuees from the two battered up islands, the emergency management agency said it is struggling to find temporary accommodation for about 4,000 people in Marsh Harbor, Abaco, perhaps the worst of the affected areas.

The local Power and Light company said its utility system in Abaco has been completely “obliterated. The situation in Abaco is dire. There are no standing electricity poles along the 16-mile stretch from Marsh Harbor to Treasure Cay. Our infrastructure has been obliterated.”

Meanwhile, authorities have suspended the normal crackdown and systematic raids on immigrant communities where they usually target Haitian immigrants. Immigration Minister Elsworth Johnson announced that because the island is “presently experiencing a humanitarian crisis in the aftermath of Hurricane Dorian, strict instructions have been given to the immigration department that our concentration is on assisting with the humanitarian efforts to rescue and save lives regardless of place of origin, nationality or immigration status “We also invite all in our community to assist as best they can with the humanitarian efforts now underway,” he said.

The Bahamas has had a perennial problem with Haitian refugees who are believed to account for up to 30 percent of the population. Some live in shanty towns in Abaco and officials fear that the death toll will increase over time when the debris from those areas are cleared.