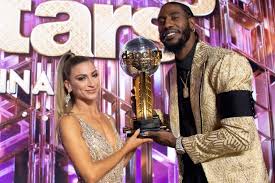 Former NBA player Iman Shumpert is the first NBA player to compete and win “Dancing With the Stars.”

Although his current success on and off the basketball court, ABC executives didn’t have high hopes: “When we were casting this season, we thought Iman was too tall to make it past the first few weeks but he would be so fun.”

The athlete told “Good Morning America” on Tuesday that he feels “accomplished” to have won, adding, “I felt like the whole season I was like telling Daniella, ‘Man, you just are great at what you do,’ and everybody was saying she didn’t have a Mirror Ball yet, so I’m really happy she got one now.”