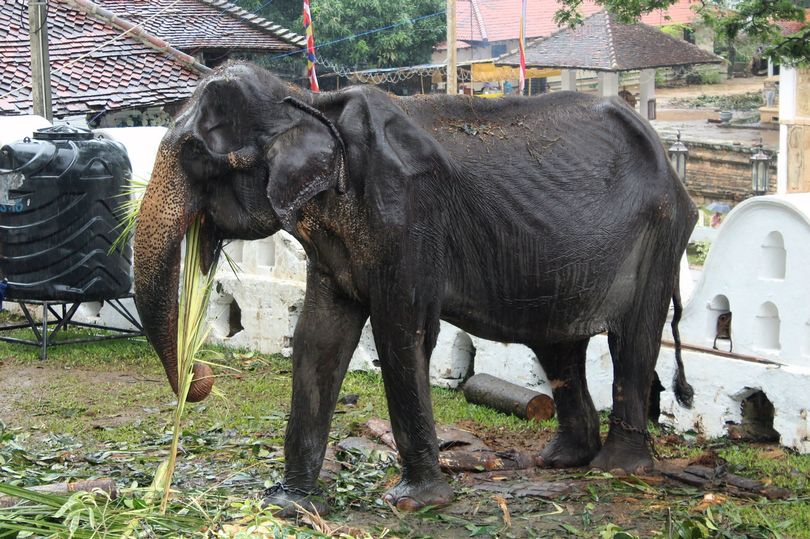 An aged 70 elephant who was dressed up and forced to march through the streets of Sri Lanka for ceremonial purposes has died.

Tikiri was one of the dozens of elephants who were forced to march for days as part of Buddhist festival in Kandy, Sri Lanka but people were outraged when photos revealed her thin body underneath her colourful costume, as well as other pictures that seemed to show her collapsed on the ground.

Sharing the sad pictures, Lek Chailert, founder of Save Elephant Foundation, said: “Tikirijoins in the parade early every evening until late at night every night for 10 consecutive nights, amidst the noise, the fireworks, and smoke.

“She walks many kilometres every night so that people will feel blessed during the ceremony. No one sees her boney body or her weakened condition, because of her costume.”

Following the backlash, Tikiri was returned to her keeper.

Save Elephant Foundation shared the sad news that Tikiri had died in a heart-felt post on Facebook.

The post reads: “The sad news is just out tonight that Tikiri passed away this evening. There is both sorrow and relief here. To think of her brings such pain to my heart.

“That hard service was her life, and not freedom, carries for me a commitment to others who yet suffer. That we could not help her before her eyes would shut forever fosters a renewed courage, and bears a responsibility for us to find safe refuges for all of the captive Giants born under the yoke of Man.

“What we wished for Tikiri, even a few days of freedom with love and care, we will demand for others.

“The day that I met Tikiri, her eyes locked with mine, telling me all that I needed to know. Her own fear and anger and sorrow is now part of that longer memory of her kind which should bear us no affection.

“Tikiri’s suffering has ended, her soul is now free. No more harm can come to her.

“RIP dear Tikiri. Never look back to this world so cruel toward you and your friends.”