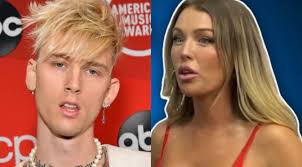 Kay appeared on the “No Jumper” podcast where she detailed what took place between herself and the rapper while they were together.

Kay recalled the time Machine Gun Kelly allegedly railed her on top of a luxury car while they were at a party.

She said “we were on the back of Logan Paul’s G-wagon, standing up, it was really hot and he like, busted a load in my a** and I had to go back in the party; dripping out of my a**.”

Kay went on to share that she was on her period during their little session but used a cup because it “holds the blood in, it’s better than Tampons,” she explained.

Kay said to this very day she still has a  haemorrhoid.

Prime Minister Rowley Departs for IX Summit of the Americas 0