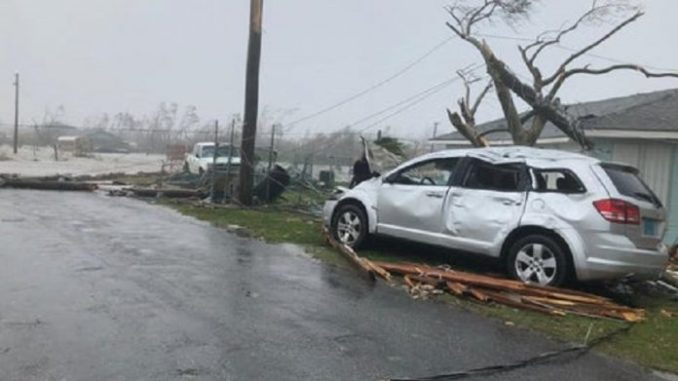 The major, life-threatening category 5 Hurricane Dorian made landfall on The Bahamas on Sunday morning, leaving major damage to many of the small islands in the archipelago.

The National Hurricane Centre (NHC), in an update, said data from an Air Force Reserve Hurricane Hunter aircraft indicated that winds increased to 185 miles per hour with the minimum central pressure falling to 911 mb.

Hurricane Dorian is the worst hurricane to have ever hit The Bahamas, with the eye of the storm passing directly over Marsh Harbour in Abaco.

Prime Minister Dr. Hubert Minnis, during a press conference on Sunday afternoon, pleaded with residents on the island of Grand Bahama to leave high-risk zones immediately.

“Grand Bahama, those individuals in the West End area, this is your last warning. We have made all necessary arrangements, at least 13 shelters available.”

“May God bless us all,” said Minnis, who said that residents of the Abacos who refused voluntary evacuation are in for the “long haul.”

Minnis, who has been Prime Minister since 2017, later broke down when describing the effects of Dorian on the island.

“This is probably the most saddened and worst day of my life to address the Bahamian people. I just want to say as a physician, I’ve been trained to withstand many things but never anything like this. We are facing a hurricane, one that we’ve never seen in the history of the Bahamas. There will be gusts in excess of 200 mph. We have some of the best standards of home-building within this region.”

“Our homes are built to withstand at least 150 mph so this will put us to the test that we have never confronted before. The extreme surge of about 20ft… that’s higher than the average roof of our homes here in the Bahamas.”

“This is a deadly storm and a monster storm,” he continued, “on two previous occasions I have asked Bahamians to leave the cays and in the west and east.”

“Many have not heeded my warning, many are left behind, there are individuals in the western area who still refuse to leave. I can only say to them that I hope this is not the last time they will hear my voice and may God be with them.”

“The Marsh Harbour area of Abaco, parts of it is already underwater and some areas you cannot tell the difference between the beginning of the street and where the ocean begins and they have not been hit by the brunt of the storm.”

The Prime Minister told reporters that the government does not have legislation authorizing mandatory evacuation, but promised that draft legislation would be brought to Parliament at the earliest opportunity.

In the latest update from the NHC at 2:00 pm (local time), the extremely distinct eye of Hurricane Dorian was located near latitude 26.5 North, longitude 77.1 West.

Dorian is moving toward the west near 7 mph (11 km/h) and a slower westward motion should continue for the next day or two, followed by a gradual turn toward the northwest.

On this track, the core of extremely dangerous Hurricane Dorian will continue to pound Great Abaco on Sunday and then move near or over Grand Bahama Island on Sunday night and Monday.

The hurricane should move closer to the Florida east coast late Monday through Tuesday night.

Maximum sustained winds are near 185 mph (295 km/h) with higher gusts.

Dorian is an extremely dangerous category 5 hurricane on the Saffir-Simpson Hurricane Wind Scale. Some fluctuations in intensity are likely, and Dorian is expected to remain a catastrophic hurricane during the next few days.

Have you seen Christian Williams? 0

One man killed, other injured during shooting in La Horquetta 0

New Traffic and Demerit Points System in effect from Wednesday 0