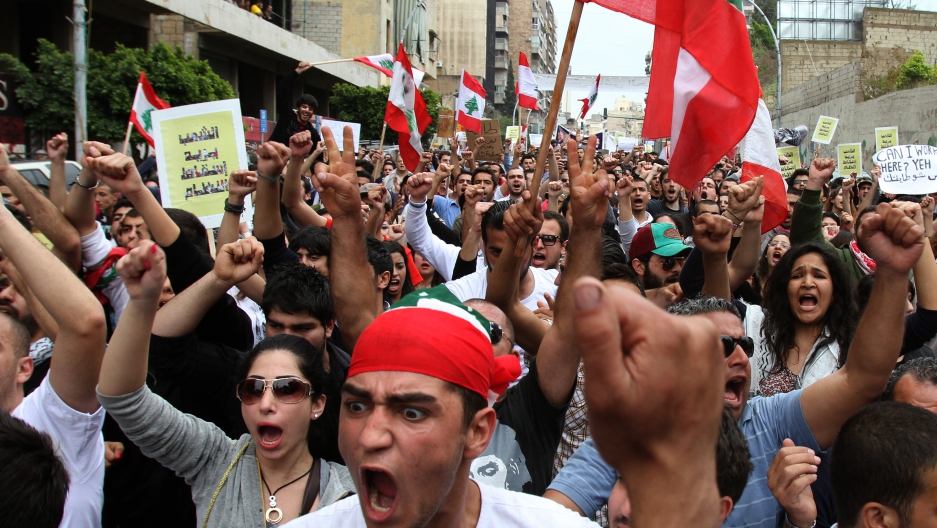 Hundreds March in Lebanon to Mark Year of Protests

Hundreds of people marched through the Lebanese capital to mark the first anniversary of a non-sectarian protest movement that has rocked the political elite but has yet to achieve its goal of radical reform.

A whirlwind of hope and despair gripped the country in the year since the protests began, as an economic crisis and devastating port explosion two months ago pushed Lebanon deeper in decomposition.

While the unrest led to the resignation of Prime Minister Saad Hariri, politicians have since failed to form a government capable of meeting the country’s challenges.

Two governments have resigned since the movement began, but the country’s barons, many of whom are strongmen in the 1975-1990 civil war, remain firmly in power despite international and domestic pressures for change.

On Saturday, hundreds of people holding Lebanese placards and flags gathered in Martyrs Square in the heart of Beirut in a scene reminiscent of last year’s rallies.

Protesters marched in front of the central bank, the target of their anger over a financial crisis that has seen the Lebanese pound lose nearly 80% of its value.

They then marched past the parliament building before gathering near the damaged harbor, observing a minute of silence just before their destination before holding a candlelight vigil near Ground Zero.

It was the precise moment of August 4th when a huge stockpile of ammonium nitrate fertilizer exploded, killing more than 200 people and devastating swathes of the capital – a disaster largely blamed on corruption and incompetence of the hereditary elite.

Activists have installed a metal monument at the site to mark the anniversary of their October 17 “revolution”.

“For a year we have been in the streets… and nothing has changed,” said Abed Sabbagh, a 70-year-old protester.

“Our demand is the dismissal of a corrupt political class which continues to compete for positions and seats” despite everything that is happening in the country, he told the AFP news agency of the main camp of protest from Beirut.

The immediate trigger for last year’s protests was a government decision to tax WhatsApp calls, but they quickly turned into a national movement demanding an end to a faith-based power-sharing system which protesters say has tarnished public life.

“Our government and political parties have dashed our hopes,” said May, a 25-year-old university student.

“We are tired and deeply ruined, they gave us no choice but to leave. ”

A spiraling coronavirus outbreak since February has resulted in a ban on public gatherings, but even without protesters on the streets, public resentment has grown.

The explosion in the Port of Beirut prompted protesters to return to the streets as a result, but the movement then shifted most of its energy to relief operations to replace what it sees as an absent state.

Since then, the political class has failed to form a new government capable of responding to demands from the streets and from international donors who have refused to release desperately needed funds.