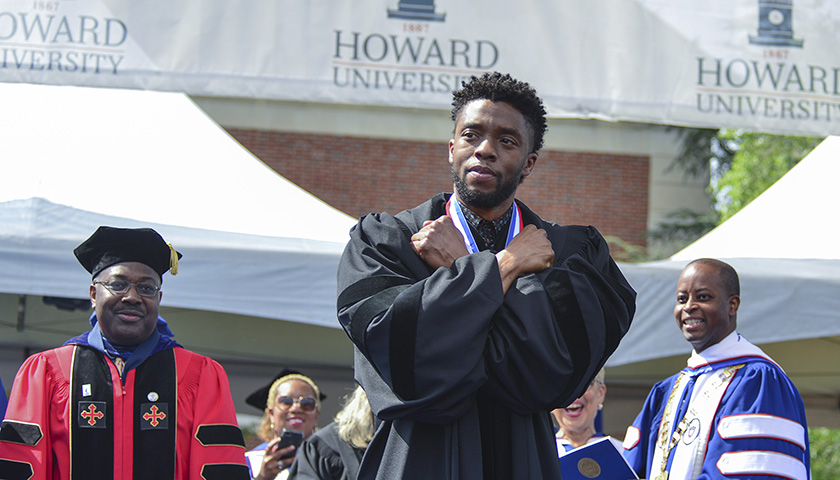 Howard University will pay tribute to the late Chadwick Boseman by renaming its performing and visual arts school after him. The school will instead be called The Chadwick A. Boseman College of Fine Arts.

The name change comes on the heels of a Change.org petition that gained traction amongst students in the months after Boseman died. The petition, which called for the name change, has garnered more than 58,000 signatures.

Wayne A.I. Frederick, the school’s president, told The Post that Boseman was set to sit on the College of Fine Arts board before his death. He was also creating a masterclass series for students of the college.

“We are very excited. This is the right thing to do,” Frederick said. “Chadwick’s love for Howard University was sincere, and although he did not live to see those plans through to fruition, it is my honor to ensure his legacy lives on.”

Howard University is pleased to name the College of Fine Arts after our iconic alumnus Chadwick A. Boseman, whose remarkable career as an actor, director, writer, and producer inspired millions around the world. Read more here: https://t.co/RrRiSfyooR #HowardForward pic.twitter.com/ssT8FeoQKv

The Hollywood Reporter reports that as part of the naming ceremony, Disney’s Bob Iger will kick off fundraising for an endowment in Boseman’s name and a new building on Howard’s campus for the College of Fine Arts.

Boseman graduated from the HBCU as part of the class of 2000. While there, he majored in directing. Boseman returned to deliver the school’s commencement speech in 2018.

Holder OUT! Braithwaite in as new Windies Test Captain 0

PM confirms that retail stores in line for reopening soon 0