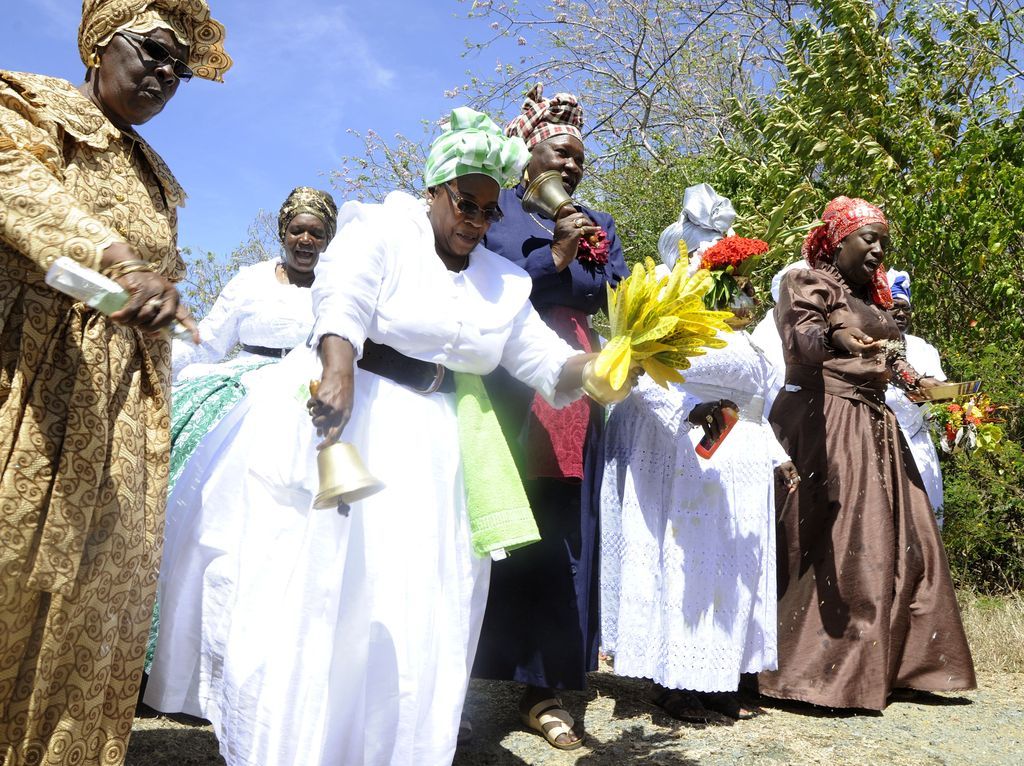 How much do you know about the Spiritual Shouter Baptists?

The origins and early development of the Spiritual Shouter Baptist Religion in Trinidad and Tobago are not well known but the consensus is that the religion developed among the people of African descent during the Nineteenth Century.

The term Shouter was given to the Baptists because of their tendency to shout, clap and sing loudly during their religious services. It was a derogatory term imposed on them by mainstream society. During their fight to have the Shouters Prohibition Ordinance repealed, the Baptists decided to use the term Spiritual Baptists instead of Shouter Baptists, in an effort to gain respect for their religion.

There are four theories that place the roots of the Spiritual Shouter Baptist Religion in Africa, Britain, North America and St. Vincent.

Although the origins of the Spiritual Shouter Baptist Faith in Trinidad and Tobago can be traced to foreign countries, it has evolved over time to become a unique, indigenous religion. It has managed to fuse the spontaneity and rhythms of Africa with the restrained, traditional tenets of Christianity to produce a religion that is vibrant, expressive and dynamic. 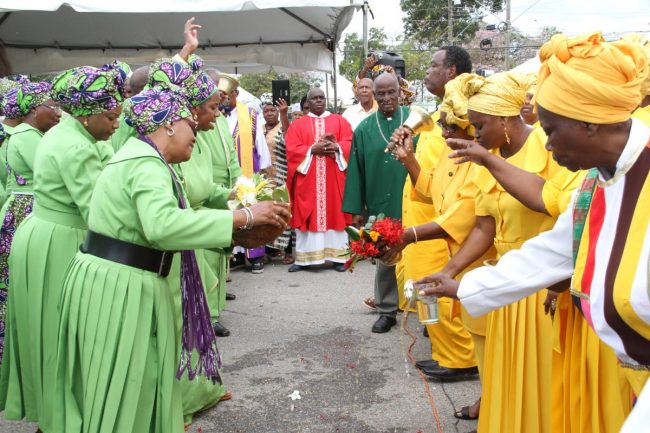 From 1917 to 1951 the Spiritual and Shouter Baptist faith was banned in Trinidad by the colonial government of the day. The legislation to enact this ban was called the Shouters Prohibition Ordinance and it was passed on 16 November 1917.
The reason given for the ordinance was that the Shouters made too much noise with their loud singing and bell ringing (Henry 32-35) and disturbed the peace.

Those thirty-four years of prohibition were difficult for the Spiritual and Shouter Baptists. The ordinance forbid them from erecting or maintaining any “Shouter House” or from holding meetings. Estate managers and owners were required to report any meetings to the police, and the police were authorized to enter a building where a meeting was being held without a warrant.

Worshipers were arrested, beaten and jailed if they were caught practising their religion. During the 1920s and 1930s, the Baptists fought many court battles and tried to counteract the negative perceptions of their faith.

It was only when Tubal Uriah “Buzz” Butler emerged as a labour leader that attitudes towards the Baptists gradually began to change. Butler himself was a devoted Baptist and controversial figure. His public meetings were reminiscent of a Baptist prayer meeting. His prominence gave the religion some legitimacy although he too was jailed for his political and religious beliefs.

Trinidad and Tobago’s community of Spiritual/Shouter Baptists fought hard for the right to practice their religion without fear of imprisonment. Observed on March 30, with a public holiday, Spiritual Shouter Baptist Liberation Day commemorates the repeal of the 1917 Ordinance with prohibited the very vocal worship practices of the religious group.

The Spiritual and Shouter Baptist Churches are not affiliated to any foreign religious organisation. It is totally indigenous to Trinidad and Tobago. 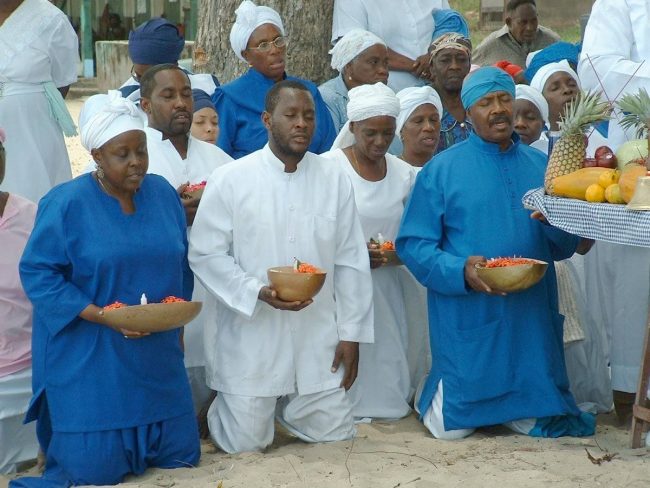 Until recently, all that was needed to set up a church or camp was for an individual to get a call from the Holy Spirit instructing him or her to do so. As a result, hundreds of independent churches were established and while the religion grew there was very little unity among the numerous churches. The Religion has lacked the formalized infrastructure of other religions.

Later, a splinter group from the National Congress, called Spiritual Baptist Christians, was formed. Although many churches came under the umbrella of one or the other of the archdioceses, they still maintain their autonomy. Yet many others remain unaffiliated with any organization and function totally on their own.

The Spiritual Baptists believe that their religion comes from John the Baptist and their name from the practice of immersing their practitioners in water as a means of baptizing them into the faith (Henry 36-39). Rituals are characterized by bell ringing, mourning, shouting and visits from the Holy Spirit.

The bell, sword, shepherd’s rod, candles and flags play important parts in many of the rituals. Members of the faith also wear special garb in various designs and colours. The individual’s colours are guided by messages received during spiritual journeys. 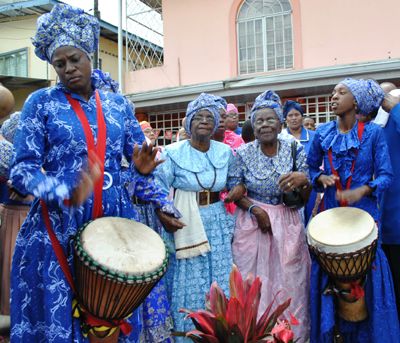 The following icons are described by Hazel Ann Gibbs de Peza in her book My Faith: Spiritual Baptist Christian.

Altar: The altar is the highest level in the church, and is the symbol of belief, prayer, praise and worship. It is also the place of mercy where God meets with his servants and answers their prayers. The altar is adorned with vessels, flowers, candlesticks and candles.

Bell: The bell is used to at the beginning of the service to call members to worship, at the end of the service or according to spiritual instructions.

Shepherd’s Rod and Staff: This symbolizes the divine authority and virtue of the office of the shepherd. That is, Jesus, the Good Shepherd.

Water: Water is used for washing, consecrating, cleansing and drinking. These uses are practical, symbolic and spiritual.

Glass with water: symbolizes the pure river of water coming from the throne of God. It is also a receptacle for flowers or bushes representing the tree of life in the midst of that river.

Lothar: The Lothar is a vessel used in the church. It symbolizes the holy state of man before God in worship and contains water and flowers. The flowers beautify the church and symbolize peace, love and joy, which are kept alive by the water of life.

Oil: As in the Bible, oil is used for anointing, for healing and blessing. Anointing has great spiritual significance and is used to make things holy.

Flowers: Flowers are God’s handiwork and are used to decorate the altar, center pole and corners of the church. These represent man’s first habitat, the Garden of Eden, and symbolize the beauty, frailty and brevity of life.

Calabash: This is the first and original vessel made by God’s own hands. It also contains water and flowers to beautify the church.

Taria: This is a vessel used in the church. It symbolizes the circle of divinity within which man places himself in worship before God. The lothar stands in it, amid grains, which are symbolic of the grace of God.

(portions of this feature courtesy NALIS)

No water for Diego Martin & Petit Valley on Tuesday 0