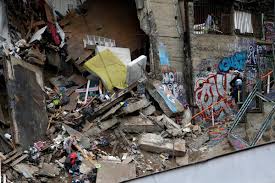 At least six people have died after two houses collapsed in the historic Chilean port city of Valparaiso late on Tuesday. The city’s authorities have confirmed and a regional official said the death toll could rise further.

Rescue workers combed through the rubble to look for four other missing people overnight on Tuesday and on Wednesday morning beneath one of the many steep hills of the city’s historic quarter, a UNESCO world heritage site.

Valparaiso’s fire service said six people were killed in the collapse of the two houses and an adjoining staircase on Bellavista hill in the historic center of the city just before 8 p.m. local time Tuesday.

“There are at least six people dead,” the fire service said in a statement. “Two of these have been recovered and firefighters are working to find the other four bodies.”

Jorge Martinez, the superintendent of Valparaiso region, told journalists the number of fatalities could increase.

“What we know for sure is that under the rubble, beneath this retaining wall, are at least four people but only when we lift that wall, which is a highly complex job, will we be able to determine for sure the total number of dead,” he said.

Two minors were admitted to hospital with injuries, the fire service statement said. The rescue attempt was temporarily suspended around 10 a.m. on Wednesday following a further collapse.

The cause of the collapse is not yet known. Local media reports said that moments prior to the buildings’ collapse, as many as 15 young people were standing on the adjoining stairway.