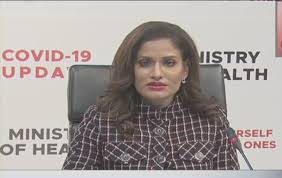 Hospital Occupancy Levels For Covid-19 On The Decline.

Local health officials are noticing what they described as a slow but consistent decline in hospital occupancy with respect to persons with COVID-19 in Trinidad and Tobago.

This development was highlighted by Principal Medical Officer of Health, Dr Maryam Abdool-Richards.

Speaking at the Ministry of Health’s virtual news briefing on Monday, Dr Abdool Richards, said this situation is a very encouraging one.

However, Dr Abdool Richard, cautioned the present scenario can quickly turned around should the population fail to continue to be vigilant in practices against the virus.