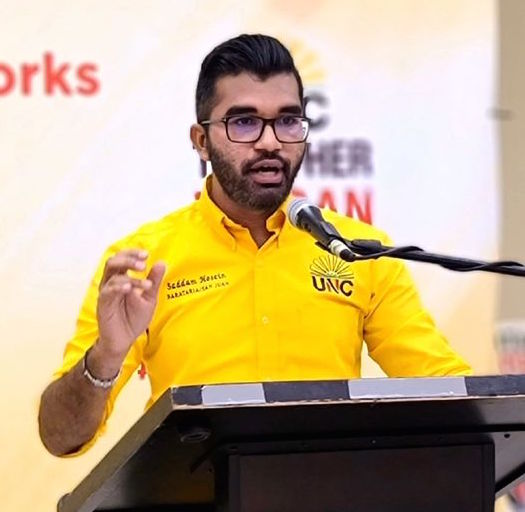 How did the Minister of National Security miss such an important detail as a plane sanctioned by the United States, being used to repatriate Venezuelans?

That was the questioned raised on Thursday night by Barataria/ San Juan MP Saddam Hosein as he addressed party supporters at the UNC Pavement Report and discussed the issue of approximately 100 Venezuelans being left stranded at Piarco Airport, after the plane which was carded to repatriate them, was not allowed entry, after it was determined to be sanctioned by the US government.

Hosein said this is an embarrassment and shows once again the incompetence of National Security Minister Stuart Young.

A National Security release said the Venezuelan Government had asked the Trinidad and Tobago Government to facilitate its repatriation flight from Trinidad to Venezuela some weeks ago and that the request was made via the normal diplomatic channels to the Ministry of Foreign and Caricom Affairs.

Young’s ministry granted preliminary approval, as it was seen as a humanitarian effort by the Venezuelan Government. However, when the details of the proposed aircraft were provided, it was discovered that it was amongst those sanctioned by the US.

Hosein asked “Is the blind leading the blind?” adding, “Stuart Young, you must go.”

Traffic disruption on the highway this weekend 0