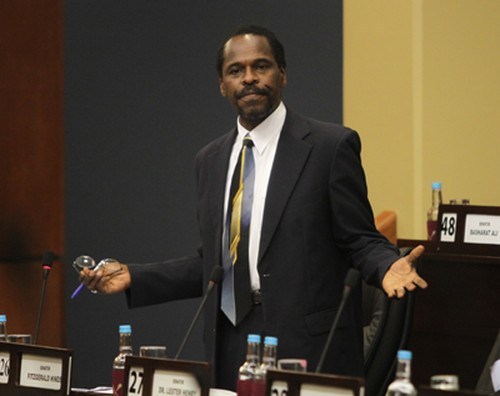 MP for Laventille West Fitzgerald Hinds said he is a bit pained and disappointed at the news that his Cabinet colleague Marlene McDonald was arrested and detained by police yesterday.

Speaking on Power 102’s Power Breakfast Show this morning, Hinds said he is awaiting the outcome of the investigation launched by police, noting that McDonald’s allegations, “came up a long time before the birth of this cabinet”. He commended Prime Minister Dr. Keith Rowley’s leadership, noting that the PM removed McDonald from cabinet once before to give the Integrity Commission time to investigate the allegations (misappropriation of funds).

Hinds said he is not sure if the Prime Minister would adopt this same approach now that she has been arrested again, since the Cabinet has not met since McDonald and her husband were arrested. He said he and the PM are awaiting updates from the police before making a decision or officially commenting on the issue.

Hinds admitted that no formal investigation took place before she re-entered the Cabinet as she had been exonerated of the allegations. He said that the PNM has a disciplinary committee but McDonald was not referred since they trusted the Integrity Committee’s decision. Her is unaware if McDonald would tender her resignation as he has not spoken to her since her arrest.