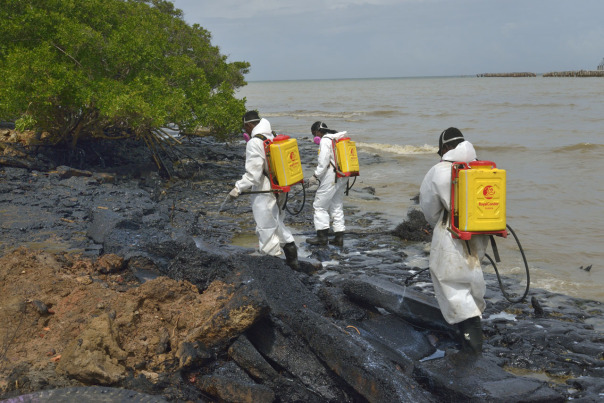 Heritage cleaning up another oil spill, this time in Vessigny

Heritage Petroleum Company Limited’s (Heritage) is currently in the process of cleaning up an oil spill in Vessigny, La Brea.

The company said it was made aware of the spill, via a video which began circulating on social media on Sunday, showing oil in a watercourse in the vicinity of Heritage’s AV106 Wellsite at Vessigny.

Heritage, via release, said it took immediate action to determine the source of the leak which was traced to a crude oil tank at the well site. Approximately 318 litres of oil have spilled out.

Heritage said “Cleaning up the area is proceeding in accordance with established industry standards and protocols. Continuous assessment and monitoring of the site is also ongoing. All regulatory bodies were notified of the incident.”

Heritage added that it is using booms – floating physical barriers which contain oil in watercourses during spills – in strategic locations.

The release said this was not the first time that such an incident happened.
“The previous incident was the result of the deliberate tampering of a valve on the tank. Subsequently, Heritage implemented an engineered solution with a view to curtailing similar incidents.”

Heritage said tampering with its equipment could lead to serious injury of people and damage to the environment.

No plans to shut down Lake Asphalt Co. 0