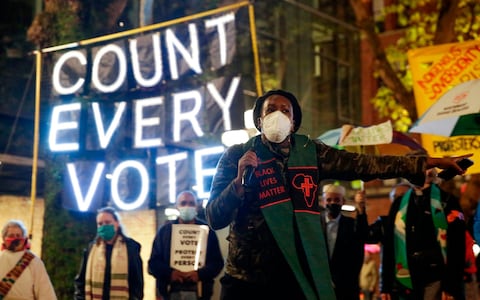 Here’s where the US Presidential race stands; as Biden draws closer to the White House

Based on CNN’s latest projections, this is where the race to 270 currently stands.

Biden won the key states of Michigan and Wisconsin, fulfilling his promise to rebuild the Democrats’ “blue wall” in the Midwest that Donald Trump demolished in 2016.

Nevada election officials, who released very little information on Wednesday with an estimated 200,000 ballots outstanding, said they expected to report their newest batch of results at midday Thursday.

As hundreds of thousands of mail-in and early absentee votes are being counted in the key battleground of Pennsylvania, Trump’s lead has shrunk dramatically.

Many of those outstanding votes are mail-in ballots that were returned in the heavily Democratic area of Philadelphia. The race is also narrowing in Georgia, where Trump’s lead slipped throughout Wednesday’s count. Georgia’s Fulton County — home to the state’s capital Atlanta — continued counting ballots throughout the night.

The race between Biden and Trump is tightening in Arizona. Biden’s lead in Maricopa County, the state’s most populous county, narrowed overnight. On Wednesday night, Arizona’s secretary of state told CNN’s John King that more than a half-million votes remain uncounted and suggested Maricopa County’s count could take several days.

President Trump’s team launched a series of lawsuits in key battleground states that seemed less about sound legal reasoning and more about slowing Joe Biden from marching over the electoral vote threshold.

At times, the lawsuits have contested ballots in the double digits — hundreds if not thousands of votes away of potentially swinging any state’s result.