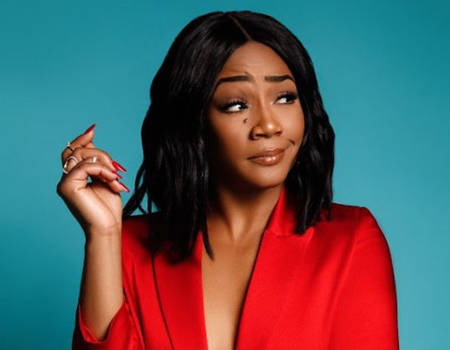 It seems the Grammys thought that they could get award-winning actress Tiffany Haddish to host their award show for free.

Per Variety, the Girls Trip actress was asked by the Recording Academy to host the pre-show for the Grammys, but she declined because she wasn’t offered any monetary payment.

In addition to the lack of compensation, the preshow for “Music’s Biggest Night” reportedly refused to offer to cover Haddish’s hair, makeup, or wardrobe for the three-hour event. “All of that would have to come out of my pocket,” said Haddish in a statement to Variety about her decision to turn down the offer.
“I don’t know if this might mean I might not get nominated ever again, but I think it’s disrespectful.”

This year, Haddish is nominated for her second Grammy for Best Comedy Album for Netflix’s Black Mitzvah and received her first nomination in 2019 for her album The Last Black Unicorn. “I was like, ‘The exposure is amazing but I think I have enough. I appreciate you guys asking,’” Haddish added. “And as much as I appreciate the honor of being nominated, that’s not okay.”

The Recording Academy said that Haddish will not be penalized for rejecting their offer to host the pre-telecast show. When contacted by Variety, a representative for the Recording Academy responded by noting that the Premiere Ceremony, which Haddish was asked to host, is not a CBS program and is hosted by the Academy, which is a not-for-profit organization — and historically, all hosts, presenters, and performers have performed without compensation at said event. However, the precedent wasn’t enough for Haddish to sign on for this year’s telecast. “This is something that needs to be addressed,” Haddish said. “How many other people have they done that to? It’s like a guy asking you on a date but telling you that you have to pay for it.” The Weeknd can relate.

Harvey Mason Jr., the interim president of the Recording Academy who’s dealt with a fair share of controversies over the past year, has apologized to Tiffany Haddish, saying that the situation was “just brought to my attention” after seeing news headlines. “Unfortunately and without me knowing, the talent booker working for the Academy told Ms. Haddish that we wouldn’t even cover her costs while she hosted this event,” Mason Jr. explained in an Instagram video. “To me, that was wrong. I’m frustrated by that decision. It was a lapse in judgement. It was in poor taste. And it’s disrespectful.” He added that he personally expressed “regret and displeasure” to the Recording Academy over how they treated Haddish. Mason Jr. didn’t specify if he has talked to Haddish about the situation or if she will be offered the gig again with appropriate compensation.

Man, 51, charged for sexual penetration of a female minor 0