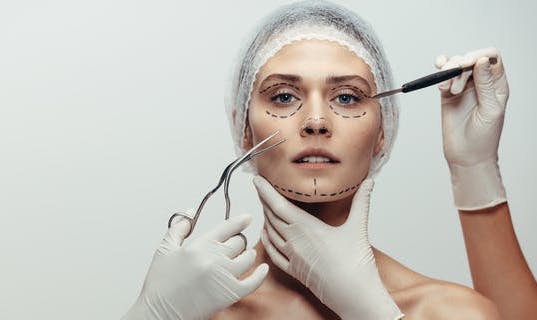 Hackers holding before and after facelift photos for ransom

Hackers have stolen the data of a large cosmetic surgery chain and are threatening to publish patients’ before and after photos, among other details.

The Hospital Group, which has a long list of celebrity endorsements, has confirmed the ransomware attack.

It said it had informed the Information Commissioner of the breach.

On its darknet webpage, the hacker group known as REvil said the “intimate photos of customers” were “not a completely pleasant sight”.

It claimed to have obtained more than 900 gigabytes of patient photographs.

The company has previously promoted itself via celebrity endorsements, although it has not done so for several years.

Atomic Kitten singer Kerry Katona, Shameless actress Tina Malone and reality TV star Joey Essex from The Only Way is Essex are also previous patients who have endorsed the clinic.

The company said it had emailed all its customers about the cyber-attack and would contact individuals who might have had more personal details compromised.

It’s understood that many before and after pictures will not include the patients’ faces.

One customer told the BBC he was worried about his pictures and data being in the hackers’ hands.

Simon Hails had chest reduction surgery with The Hospital Group.

He said the company had not told him about the ransom.

“I have had an email from The Hospital Group informing me of a ‘data security incident’ but no detail as to what has been hacked,” he told the BBC.

“I’m obviously concerned as the last thing I want is ‘before photos’ being splattered around in the public domain. I’ve tried to keep my surgery private and not even some of my friends and colleagues know about it, so the data breach is concerning for me.”

Ransomware is one of the most prolific forms of cyber-attack. It typically involves hackers gaining access to a computer network and either encrypting files or locking users out of their systems until a ransom is paid.

More recently, ransomware gangs have been taking a copy of the data and threatening to release it.

CDC wans against travel to Armenia, Austria and Barbados due to concerns over COVID-19 0