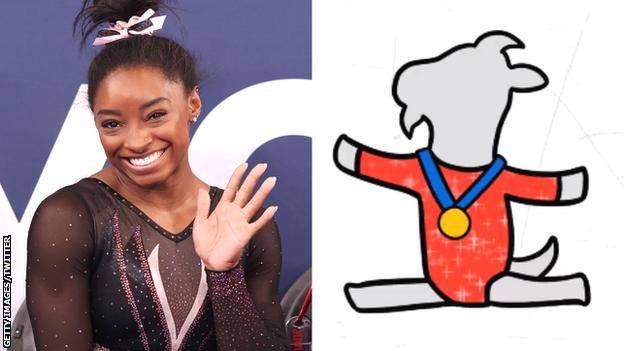 Gymnast Simone Biles gets her own goat emoji

Sporting icons who achieve worldwide recognition are used to being honoured.

Sometimes, it’s a statue in their home town, a fancy title, or perhaps a star on the Hollywood Walk of Fame.

But in the 21st century, another is getting your own official Twitter emoji.

American four-time Olympic gymnastics champion Simone Biles has become the first female athlete to have the honour bestowed upon her.

And of course, it’s a goat.

The leotard and medal-wearing goat (similar to the superstar’s personal emblem “Goldie the goat”) will appear when a Twitter user posts the hashtags #SimoneBiles or simply #Simone, throughout the Tokyo Olympic Games, which officially begin on Friday.

Biles’ symbolic goat was originally created as a response to “the haters”, she told US magazine Marie Claire earlier this year.

She said critics often accused her of being over-confident, with one joking that she would put a goat (a reference to the commonly-used acronym GOAT for “Greatest Of All Time”) on her own leotard.

“I was like, ‘Oh, that’s actually a good idea Let’s make the haters hate it, and the fans love it’,” she said. “And so that’s exactly what we did and why we did it.”

Biles is hot favourite to add to her collection of five Olympic medals and is aiming to become the most decorated American gymnast in Olympic history by surpassing Shannon Miller’s total of seven.

During a training session on Thursday she practised a series of sharp routines that included a vault so difficult that no other woman has ever attempted it in competition.

She has not lost a competition since 2013 and is aiming to become the first woman to win back-to-back Olympic all-around golds in more than half a century.

Gary Griffith: The Express newspaper has an agenda against the TTPS 0