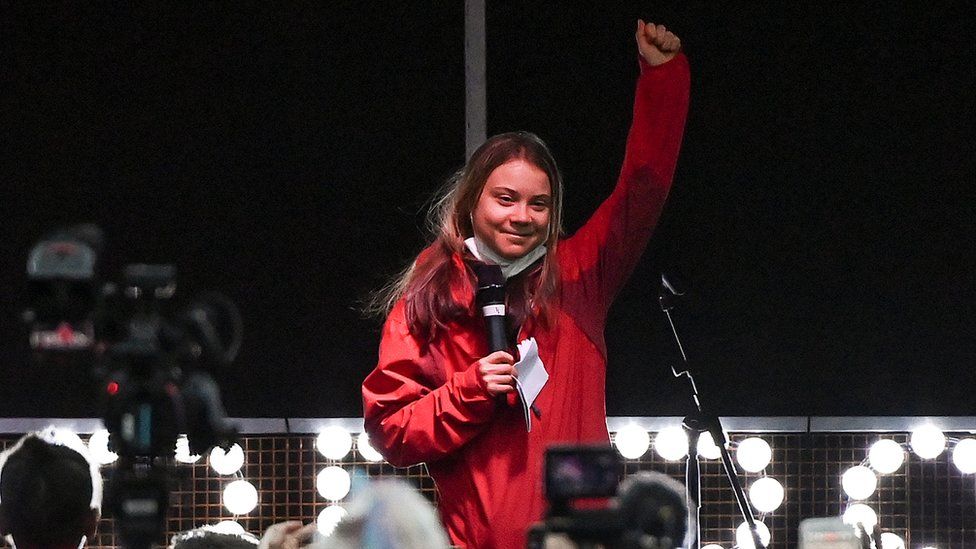 Greta Thunberg says COP26 has been a ‘failure’

Greta Thunberg has told a mass rally in Glasgow that the COP26 climate summit has been a “failure”.

The Swedish activist had earlier joined thousands of young people – including striking school pupils – for a march through the city.

She addressed the crowd when it arrived in George Square, saying “immediate and drastic” cuts to emissions are needed.

The march was organised by Fridays for Future Scotland, a group founded by youngsters inspired by Ms Thunberg.

It was one of the largest of a series of demonstrations taking place throughout the summit, which is being held in the city.

Ms Thunberg said: “It is not a secret that COP26 is a failure. It should be obvious that we cannot solve a crisis with the same methods that got us into it in the first place.”

She said: “We need immediate drastic annual emission cuts unlike anything the world has ever seen.

“The people in power can continue to live in their bubble filled with their fantasies, like eternal growth on a finite planet and technological solutions that will suddenly appear seemingly out of nowhere and will erase all of these crises just like that.

“All this while the world is literally burning, on fire, and while the people living on the front lines are still bearing the brunt of the climate crisis.”

Ms Thunberg added: “We know that our emperors are naked.”

Activists from several other countries also gave speeches about how climate change is already affecting their homelands.

They included including Vanessa Nakate from Uganda, who said: “Historically, Africa is responsible for only 3% of global emissions and yet Africans are suffering some of the most brutal impacts fuelled by the climate crisis.

“But while the global south is on the frontlines of the climate crisis, they’re not on the front pages of the world’s newspapers.”

The procession marched through the city’s west end, past the COP26 site at the Scottish Events Campus, before heading towards the city centre.

It ended at George Square where a stage and speakers had been erected.