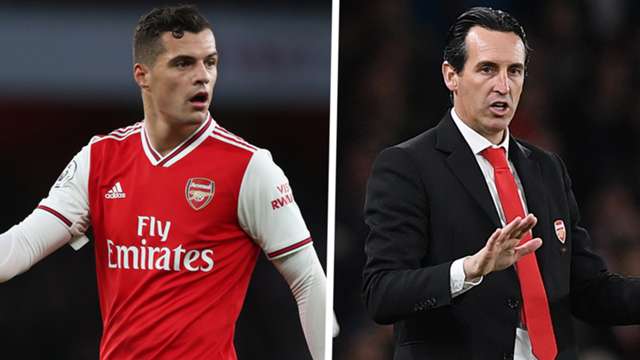 Arsenal manager Unai Emery said he did not know whether midfielder Granit Xhaka would play again for the club after the Swiss international swore at home fans and was stripped of the captain’s armband.

Xhaka has not played since the October 27th bust-up at the Emirates and Emery told reporters on Friday he had asked not to be picked for Saturday’s Premier League match at Leicester City.

The manager said Arsenal would wait until Xhaka was in the right frame of mind to play for the club again but later indicated he could not be certain that would happen.

“We need a player like Granit Xhaka. But also, I don’t know if he’s going to play again,” the BBC quoted the Spaniard as saying.

“I don’t know if he is available in his mind to continue helping us and continuing defending the Arsenal shirt.”

Asked about a possible transfer in the January window, the manager said he was not thinking about that because it was only November.

“We’re going to play a lot of matches in November and December. We cannot change him in those two months. The club is speaking with him and we’re going to decide how he is and how I’m thinking we use him.”

Xhaka reacted angrily to home fans booing him after he was substituted during Arsenal’s 2-2 draw with Crystal Palace at the Emirates Stadium last month.

With on-loan midfielder Dani Ceballos also injured and unavailable, Emery said Mesut Ozil – who has played only twice in the league this season – was in contention.

“(Ozil) is training well and I think he is now being consistent in the training, he is also helping and being positive. I am thinking he has a possibility to play tomorrow.”

Loading...
Newer Post
Why You Shouldn’t Depend On A Relationship For Happiness…True or False?
Older Post
Haitians Seek Medical Help From US Navy Ship Amid Protests

Hanging fixes nothing; gov’t needs to focus on human development and crime prevention 0