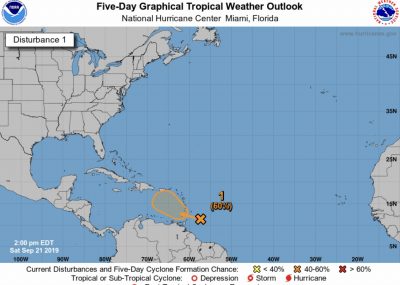 Satellite, radar and surface data indicate that the area of low pressure located just north of Tobago in the Windward Islands is
becoming better organized and is producing winds to near tropical storm force in the eastern portion of the system. Further
development of this disturbance is expected over the next couple of
days, and a tropical depression or tropical storm will likely form
while it moves west-northwestward and then northwestward at 10 to 15 mph across the Windward Islands and over the eastern Caribbean Sea.

The system is then expected to turn northward, moving near Puerto
Rico and the Virgin Islands on Tuesday. Heavy rainfall and strong gusty winds are likely over much of the Leeward and Windward Islands during the next couple of days and will spread across Puerto Rico
and the Virgin Islands by Monday night or Tuesday.

Interests across the eastern Caribbean should monitor the progress of this low, and tropical storm watches and warnings will likely be required for
portions of the Leeward Islands and Puerto Rico later today. An AirForce Hurricane Hunter is scheduled to investigate the system this afternoon.

2. A strong tropical wave along the west coast of Africa is already
producing thunderstorm activity that is showing some signs of
organization. Environmental conditions are conducive for further development, and a tropical depression or tropical storm is expected to form on Monday or Tuesday while it moves westward to west-
northwestward across the eastern tropical Atlantic at 15 to 20 mph.