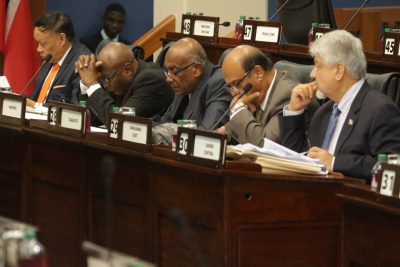 Opposition MP’s during debate on The Bail Amendment Bill

Government and Opposition members were able to agree on one matter today: the passing of the Bail Amendment Bill. The new legislation was passed in the House of Representatives by a unanimous vote of 32-0.

Government made the decision to reconvene the Parliament, which is on an official recess until September. Attorney General Faris Al Rawi said in a media briefing recently that after noticing several “observations in the public domain” the Government saw it fit for members to meet to debate the Bill. As it relates to parliamentary procedure, there is an exception under the standing orders which permits the Parliament to be called back in session for matters which are urgent.

The Bail Amendment Bill seeks to deny bail for 120 days, to a person charged with a listed offence that is punishable for a term of imprisonment of ten years or more. This includes firearm-related offences, as well as addresses repeat offenders charged with certain crimes. It requires a three-fifths majority to be passed.

The Bill was passed in the Senate with the support of 15 Government Senators and nine Independent Senators. Six opposition Senators denied the legislation.

Trade Minister Leads Delegation To The 54th Meeting Of COTED 0