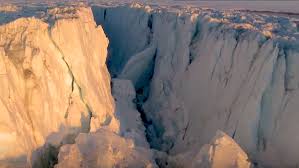 Australian scientists have used satellite imagery to capture the vision of a gigantic iceberg breaking away from the Amery Ice Shelf in East Antarctica.

According to Scripps Institution of Oceanography Professor Helen Amanda Fricker, “we first noticed a rift at the front of the Ice Shelf in the early 2000s and predicted a large iceberg would break off between 2010-2015,” she said on Tuesday.

“I am excited to see this calving event after all these years. We knew it would happen eventually, but just to keep us all on our toes, it is not exactly where we expected it to be.”

Described as a “loose tooth” by Fricker, she said the dramatic calving event that took place on Sept. 26, was not a result of climate change.

“It’s part of the ice shelf’s normal cycle, where we see major calving events every 60-70 years,” she said.

Researchers also believe the breakaway iceberg will not have any significant impact of sea levels, despite its size.

“The calving will not directly affect sea level because the ice shelf was already floating, much like an ice cube in a glass of water,” Glaciologist with the Australian Antarctic Program, Dr Ben Galton-Fenzi, said.

“But what will be interesting to see is how the loss of this ice will influence the ocean melting under the remaining ice shelf and the speed at which the ice flows off the continent.”