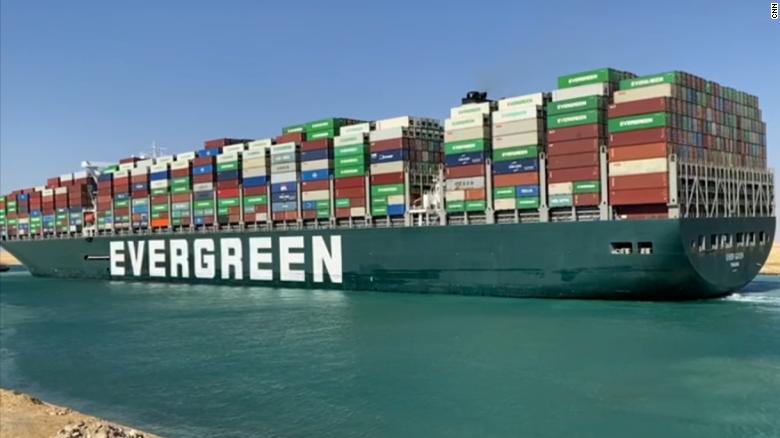 A giant container ship that blocked the Suez Canal for nearly a week has finally been freed after a mammoth salvage operation.

Tug boats honked their horns in celebration as the 400m-long (1,300ft) Ever Given was dislodged on Monday.

Traffic is set to resume in both directions through the canal at 19:00 local time (17:00 GMT), according to local authorities.

Hundreds of ships are waiting to pass through.

Suez, which connects the Mediterranean to the Red Sea through Egypt, is one of the world’s busiest trade routes.

Peter Berdowski, CEO of Dutch salvage company Boskalis, said the Ever Given had been refloated at 15:05 (13:05 GMT) on Monday, “thereby making free passage through the Suez Canal possible again”.

The vessel was being towed for safety checks to Great Bitter Lake, which sits between two sections of the canal to the north of where the ship got stuck.

Egyptian President Abdul Fattah al-Sisi thanked Egyptians for their efforts in “ending the crisis” in the canal.

The 200,000-tonne Ever Given ran aground last Tuesday morning amid high winds and a sandstorm that affected visibility.

To refloat it, Boskalis deployed a specialist salvage team, SMIT Salvage Papendrecht. They first freed the stern, with the bow following, despite high winds.

Approximately 30,000 cubic metres of sand were dredged, with a total of 11 harbour tugs and two powerful seagoing tugs deployed.

On Sunday, canal officials had begun preparing to remove some of roughly 18,000 containers on board in order to lighten the load.

The containers are carrying a huge variety of items and the insured value of the cargo is believed to amount to hundreds of millions of dollars.

Ship tracking website VesselFinder reports that no cargo vessels have yet to enter the canal from Suez at the Red Sea end.

The Suez Canal Authority has warned that it may take up to three days to clear the backlog of ships stuck at both ends of the canal.

Meanwhile, the Ever Given will undergo a full inspection at Great Bitter Lake, the vessel’s technical managers, Bernhard Schulte Shipmanagement, said.

It said there had been no reports of pollution or cargo damage, and initial investigations had ruled out any mechanical or engine failure as a cause of the grounding last week.

The ship’s Indian crew of 25 remain aboard the vessel are safe and in good health, BSM said, adding: “Their hard work and tireless professionalism are greatly appreciated.”