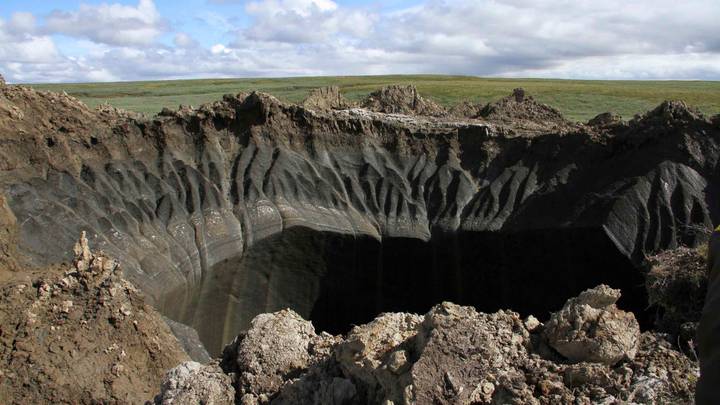 An explosion believed to have been caused by subterranean gases has opened up a massive hole in the ground in Russia’s Arctic, the latest natural phenomenon to affect the fast-warming region amid a record-setting summer.

Russian scientists discovered the 164-feet deep crater on an expedition to the Yamal Peninsula above the Arctic Circle in July, according to state television. It was dubbed Crater 17 as 16 similar objects have been discovered in Siberia’s extreme northwest since the phenomenon was first observed in 2014.

The Gizmodo science news website nicknamed the vast hole a “pit to hell.”

“It was making noises. It was like something alive,” Yevgeny Chuvilin, one of Russia’s leading permafrost experts who took part in the expedition, said of Crater 17 to The New York Times.

Researchers believe that the craters are formed when long-frozen earth known as permafrost begins to melt and release trapped methane gas, according to Popular Mechanics. The methane creates bulges on Earth’s surface known as pingos, which eventually explode and leave behind craters.

The trapped methane “goes off like a bottle of champagne,” Chuvilin told NYT.

According to the NYT, there are two working theories on what causes the pressure to rise enough to lead to an explosion: deep-seated frozen methane reverting to its gaseous state or thawing surface permafrost releasing methane deposits.

Chuvilin told NYT that the conditions that cause the explosions may be specific to the far north of western Siberia, pointing to an absence of similar craters elsewhere in Siberia or permafrost-covered Canada and Alaska, regions which are also impacted by climate change.

Melting permafrost has also been linked to a massive diesel fuel spill near the Arctic city of Norilsk in May, which environmentalists have called the worst-ever spill of its kind to hit the region.

Russia’s Arctic and Siberian regions, already warming at a faster rate than the rest of the world, are facing a historic summer heat wave accompanied by wildfires, fuel spills, crop failures and more.

Permafrost researchers have said that this summer’s heat has also accelerated the expansion of a 100-meter crater that appeared in eastern Siberia following deforestation in the 1960s.

A member of the July expedition to Crater 17 told Russian state television that his team plans to conduct further research into the crater and submit its findings to an academic journal.