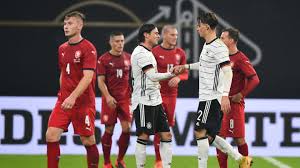 It was a refreshing performance for long stretches of the German national team, which will probably never appear again in this line-up. The DFB-Elf won the test match in Leipzig on Wednesday evening (11/11/2020) deservedly 1-0 (1-0). In this game, which took place without spectators, national coach Joachim Löw gave the hopeful second row of the national team the chance to present themselves – and some young professionals used this for self-promotion and offered themselves as a real alternative for the A-team.

“In the constellation we will probably not play together anymore. The guys really got involved. We could have extended our lead in the first half. We defended the lead in the second. You could tell that we really wanted to win the game. That was okay, “said Loew.

Ilkay Gündogan was overall satisfied with the performance of the young German team. “We did it really well at times. Should have scored one or two goals,” said the midfielder, who also explained the not so good second half. “We had a couple of guys where you noticed that they were very nervous. If an action doesn’t work, then the nervousness increases again and you don’t want to make a mistake. The important thing is that you forgive the guys for that. “

After a few minor coordination difficulties in the first few minutes, the German B-Elf started very briskly and bravely. The first two goal approaches were not yet successful. After 13 minutes, midfielder Florian Neuhaus grabbed the ball and pulled it from 20 meters. Czech goalkeeper Jiri Pavlenka initially fended off to the side, Philipp Max passed the ball directly in front of the goal, where attacker Luca Waldschmidt easily converted to 1-0 from five meters.

The young German team then tried a controlled but also risky build-up of the game from their own penalty area. The Czechs, who were also severely weakened by the corona pandemic, acted with very high offensive pressing in order to conquer the ball early – which they succeeded every now and then. The DFB team survived these dicey situations unscathed, also because goalkeeper Kevin Trapp was attentive to the Czechs attempting to shoot.

Especially the DFB debutants on the flanks, Ridle Baku on the right and Philipp Max on the left, drove their team’s game on again and again and showed no nervousness. Neuhaus, Julian Brandt and Ilkay Gündogan in the headquarters were always looking for depth, won many duels, let the ball run through their own ranks worth seeing and repeatedly initiated promising offensive actions. The efficiency in front of the opposing goal was too often missing.

The German team could have gone into the break with a higher lead, but Nadiem Amiri failed twice within a few seconds with goalkeeper Pavlenka with a double chance shortly before the break whistle.

However, even in the second half, in which the efforts became much clearer, the DFB-Elf was able to achieve another goal. After 76 minutes, Neuhaus hit the goal post with a brutal shot from the second row. “It’s a shame that it doesn’t go in,” said Neuhaus. “That would have been the preliminary decision. The win was important. But we missed the second goal and made life difficult for us.”

There was still a lack of accuracy in the final, even with further shots on goal by Neuhaus and Dahoud. Eight minutes before the end, Trapp had to use all his skills after a header from attacker Matej Vydra. In the end, the B-Elf brought the game unscathed over time.