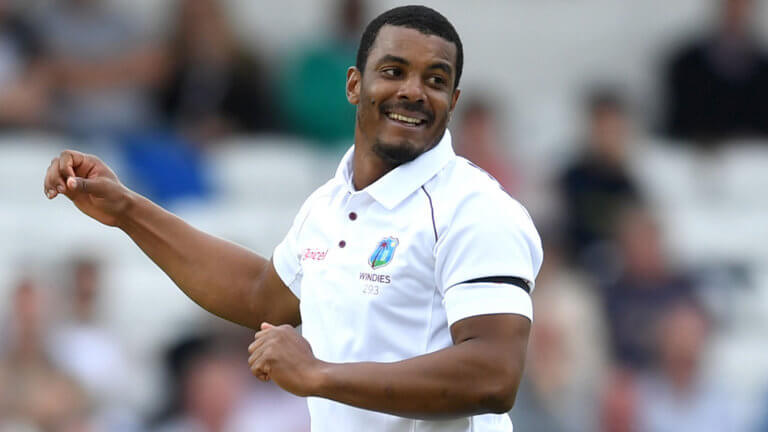 The strongly-built Gabriel ended with three wickets for 57 runs off 18 overs, while the left-handed Nicholls closed on 117 not out, as the home side reached 294-6 at the historic Basin Reserve in Wellington. He will resume on Saturday alongside Kyle Jamieson (one not out) as the #MenInMaroon will have their eyes on early wickets and a quick wrap-up of the innings.

The occasion was also special for West Indies debutantes Joshua DaSilva and Chemar Holder. The first-timers combined for the second wicket in the New Zealand innings, when Holder went around the wicket and produced the perfect delivery — angled in and moved away – to dismiss left-hander Tom Latham.

The delivery lured the New Zealand skipper into an ambitious stroke which took the edge and was comfortably taken behind by the keeper, for his first catch at this level. The 22-year-old Holder collected another wicket later in the day – when he had Daryl Mitchell trapped in front for 43.DaSilva, also 22, had a tidy day behind the stumps and held a second catch — the prized wicket of of Ross Taylor, who was troubled by Gabriel’s extra pace and movement before he edged an exceptional delivery to put the visitors on top at 78-3.

One of the highlights of the day was a magnificent catch by captain Jason Holder at second slip to give Gabriel the magical milestone of his 150th wicket. West Indies however had a few blemishes in the field and Nicholls was let-off on at least two clear occasions.

Before the match, West Indies held a ceremony on the field as Chemar Holder and DaSilva were presented with their Test caps by Ian Bishop and Roger Harper. Gabriel also received a special commemorative memento from Bishop, his mentor.

The members of both teams and the match officials also took the ahead before the first ball to mark support for the Black Lives Matter global movement against injustice and inequality as well as the No Room For Racism campaign in New Zealand.