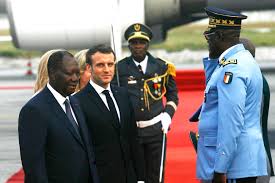 French President Emmanuel Macron on Saturday said: “colonialism was a grave mistake,” and called for “turning the page” on the past during a visit to Ivory Coast, a former French colony in West Africa.

Macron, speaking in Ivory Coast’s main city Abidjan, said France was often viewed as having a “hegemonistic view and the trappings of colonialism that was a grave mistake and a fault of the Republic.”

“I belong to a generation which was not part of the colonial-era,” he said.

“The African continent is a young continent,” he said.

“Three-fourths of your country never knew colonialism,” he said, addressing Ivorians and called on African youths to “build a new partnership of friendship with France.”

During his election campaign for presidency Macron had created a storm by calling France’s colonization of Algeria a “crime against humanity”.

In a 2017 TV interview, he said French actions in Algeria, which achieved independence in 1962 after eight years of war, were “genuinely barbaric, and constitute a part of our past that we have to confront by apologizing”.