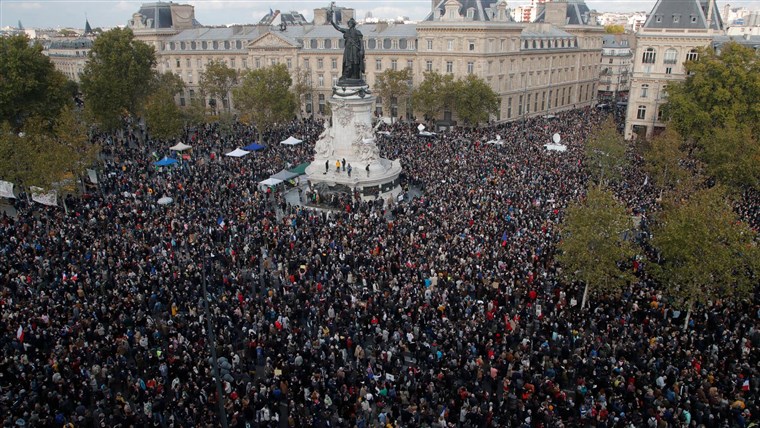 In a nation that values ​​the power of protest, the Place de la Republique, in the heart of Paris, is a traditional place to express your emotion.

There are demonstrations here every weekend. When I came to Paris for a huge anti-government protest last year, the place found itself enveloped in tear gas, its cobblestones ripped off to be thrown at the police but on Sunday the protests were of a very different order. Fueled by outrage over the gruesome and savage murder of Samuel Paty, it was a very public display of unity.

Thousands of people gathered in the square. There have been similar protests in cities from top to bottom of France – from Lille to Marseilles, all strewn with placards stating “Je suis Samuel” or “Je suis Prof” – related to the murdered professor.

However, while applause rang out repeatedly, these events were not simply intended to pay homage to Mr. Paty.

These protests were a complex mix of themes – anger at the murder, mixed with resentment that the government, in the minds of some we spoke to, failed to grasp the challenge of Islamist terrorism.

For some, it was a demonstration in defense of freedom of expression, while others saw it as a show of force against racism.

And then there were those who came with placards adorned with the controversial cartoons of the Prophet Muhammad – the same cartoons Mr. Paty showed his class a fortnight ago, apparently starting the train of events that ended with his wild death.

There were flags of Algeria, Tunisia and Morocco here. It was a diverse crowd, just as Paris is a multicultural city, but the question now is to know the fundamental principle of French identity.

In the past 48 hours, more than one official said the republic was under attack.

France is a country extremely proud of its secular government and the right to freedom of expression. “We are not afraid and we will not be divided,” Prime Minister Jean Castex said.

Courageous and outspoken words – but the truth is that there are many in France who at least fear that this brutal murder will not mark the end of Islamist terrorism, but rather the latest chapter in an ongoing saga.