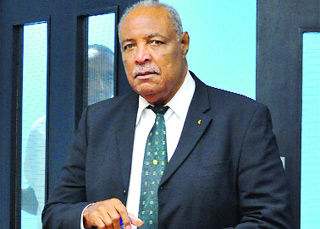 Former Chief of Defence Staff, Major General Ralph Brown, said he’s not convinced that the officer caught on video stuffing his tactical uniform with cash is a solider.

The video, which has since gone viral, shows an officer using his tactical uniform as a wallet, while participating during last week’s raid at the La Horquetta home of Drugs Sou Sou (DSS) operator Kerron Clarke.

The police-led raid netted $22 million in cash, which is now the subject of a police investigation.

Browne said that after viewing the footage, he was not totally convinced based on what the man was wearing.
He said back is in his day, no soldier would be dressed like that to go on any joint patrol wearing such apparel. He said “They would have worn military uniform. I don’t recognise that as being a military uniform.”

Brown said he also found it strange that the soldier was not wearing military boots. “Not something that looked like a slippers or sneakers.”

He also said the hallmark of the TTDF is based on honesty, discipline, trust and integrity.

However, Brown said if it is a soldier, the officer should be immediately investigated and if found guilty of wrongdoing be charged and dismissed from the TTDF.

He said the negative actions of a soldier can tarnish the entire reputation of the TTDF.

UNC leader: Workers are facing increasing challenges as a result of the PNM government 0