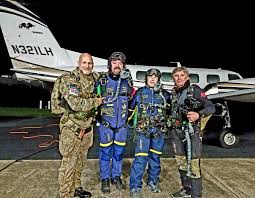 Florida man who was trying to break a Guinness World record for skydiving ended up dying right before they were able to do the stunt, the Detroit Free Press reports.

Thomas Noonan III, 47, and his friend Jim Wigginton were trying to do a tandem skydive from 41,000 feet last month. But a number of things went wrong in the air.

Wiggington jumped out, but Noonan’s foot got stuck and he was still in the plane while Wigginton was hanging out of it. An oxygen system then malfunctioned and they and a few members of the crew on the plane briefly lost consciousness.

After Wigginton regained consciousness, his dangling body was pulled back into the plane. CPR was started on Noonan, but he never woke back up.

Schools in Mayaro get sanitised ahead of SEA 0

Opposition Leader calls on the PM to resign 0