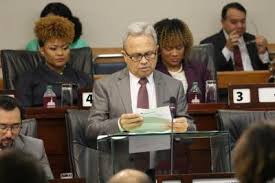 FIU reports increase in the number of suspicious transactions

Minister of Finance, Colm Imbert, says the Financial Intelligence Unit has noticed a significant increase in the number of suspicious transactions which amounts to over twenty-seven million dollars when compared to the previous year.

Minister Imbert said during the reporting period and for the first time the FIU received a total of one thousand, eight hundred and thirty-one suspicious transaction reports the most it has received in its ten years of existence.

Minister Imbert gave the update while delivering the highlights of the   annual report of the Financial Intelligence Unit of Trinidad and Tobago for the year ending September 30th 2020.

Head of SORT detained for questioning

Head of SORT detained for questioning 0

Haiti Court Orders Release of Those Accused in Alleged Coup 0

Hundreds March in Lebanon to Mark Year of Protests 0