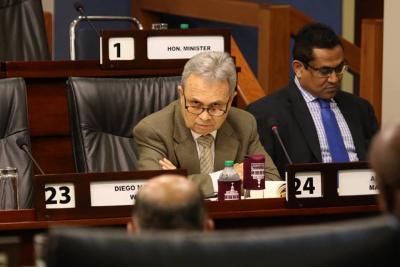 The Minister of Finance, Colm Imbert, in a media release said he has taken note of allegations made by the Leader of the Opposition in her response to the 2020 Budget Statement.

In his release Minister Imbert wrote that the Opposition Leader indicated that he gave written directions to the Central Bank to sell the traditional portfolio of insurance policies of the Colonial Life Insurance Company to a local insurance company, thereby insinuating irregularity and wrongdoing on the part of the Minister.

The Leader of the Opposition also demanded that the Minister disclose these alleged instructions.

According to the Finance Minister, “the allegation is false.”

Contrary to the false statements made by the Leader of the Opposition in the Parliament today, in her response to the Budget Statement, the Minister of Finance has given no such directions to the Central Bank regarding the sale of the traditional portfolio of CLICO policies, or any directions at all.

At this stage, all that is happening is that the Central Bank is continuing to exercise its powers under Part VA, Section 44D of the Central Bank Act with respect to managing the affairs of an insurance company that has been under its supervision for the last 10 years.

As a result, there are no instructions to disclose with respect to this matter, because none exist.

Loading...
Newer Post
Race talk in the House during debate
Older Post
Opposition Leader returns fire at the Finance Minister on the sale of CLICO/BAT assets

Kool-Aid in the U.S recalled due to pieces of metal or glass in the canisters 0