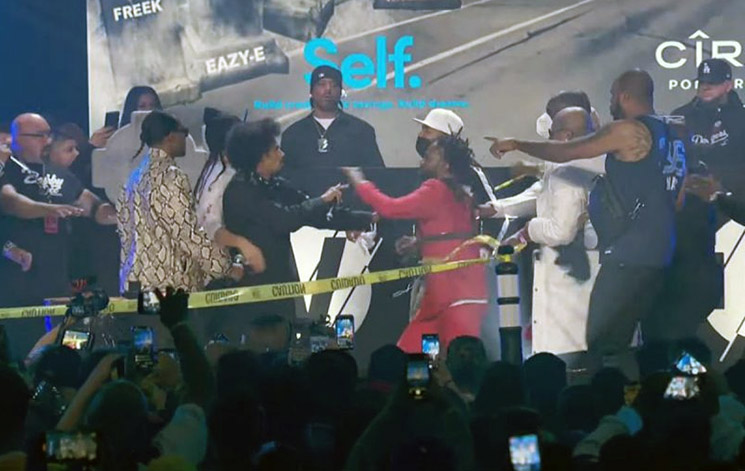 It certainly wasn’t all love between Bone Thugs-N-Harmony and Three 6 Mafia during the group’s Verzuz battle … with a brawl breaking out between the two which caused the show to come to a halt.

The highly-anticipated showdown took place Thursday at The Hollywood Palladium, Bone Thugs’ Bizzy Bone finished a verse, then called out members of Three 6 for “mocking him.” Bizzy says, “Aye, yo … Aye, before we even get started, you ugly motherf****** ain’t finna be mocking me while I’m on motherf*****’ stage. Like straight the f*** up.” Bizzy then appears to throw a water bottle toward Three 6’s side … and all hell breaks loose.

You can see fists fly, hear insults hurl and members of Three 6 storm over to Bone Thugs’ side.

Thankfully, before long, security and members from each team were able to calm the situation and the show started back up.

When he got back on stage, Bizzy apologized, saying, “I wanna apologize to everybody the f*** out here. On both sides. I’m not trying to f*** this shit up. Pardon me. Let’s keep the party mother******’ going.”

There was some evidence prior to the show that things might get testy between both groups, Bizzy had previously called three 6 Mafia “devil worshipers,” posting on IG, “Now through JESUS CHRIST all things ARE possible but you wanna prove ya’ll not some devil-worshipping punk ass n***az then denounce satan on this BIG ASS PLATFORM TONIGHT! I CHALLENGE YOU ALL!!”

The rest of the show went on without issue, and saw guest appearances from Terrence Howard, Lil Jon, Lil Wayne and Lil Flip.

Meanwhile, Swizz Beatz lashed out at Bone Thugs N Harmony for their ridiculous demands, which included high booking fees and making the show start late so a Riker’s prisoner can bless it before it starts, all while they showed up late and drunk.

The Verzuz co-founder did not hold back as he dragged the group that blew up in the 1990s and is best known for songs like “Thuggish Ruggish Bone” and “Tha Crossroads.”

According to Swizz Beatz, the group overcharged Verzuz as they demanded prices for their performance beyond what they were actually worth and even caused the show to start late.

“New rule if you don’t start on time you don’t get paid on time!!!! Verzuz is not free!! They charge us like 5x they do non black shows,” Swizz Beatz said in one tweet with the shocked emoji and the shrugs emojis.

In another tweet, he, in essence, said the group was washed up but demanded current performance prices.

“Ain’t did a show in 23 summers and want to charge us like the sold out stadium prices! Talking about yesterday’s price is not today price sh*t.”