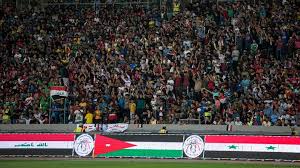 Global football’s governing body Fifa said on Wednesday it has told Iraq to play two 2022 World Cup qualifiers they were due to host this month at a neutral venue due to the security situation in the country.

Iraq played their first competitive match on home territory for eight years last month when they hosted Hong Kong in a World Cup qualifier in the southern city of Basra where this month’s games were also scheduled to be played.

However, they must again look for an alternative venue for their matches against neighbours Iran on Nov. 14 and Bahrain five days later.

Fifa said in an emailed statement to Reuters that it took the decision jointly with the Asian Football Confederation (AFC) “following an assessment of the current security situation in Iraq”.

“The Iraqi Football Association has been requested to nominate a neutral venue for the said matches,” it added.

Iraqi security forces shot dead at least 13 protesters on Monday and Tuesday, dispensing with weeks of relative restraint in favour of trying to stamp out demonstrations against political parties that control the government.

In the southern oil-rich province of Basra, security forces forcibly dispersed a sit-in overnight but there were no deaths reported, security sources said. Protesters had camped out in front of the provincial government building.

Iraq, whose only appearance at the World Cup was in 1986, top Group C in the second round of Asian qualifiers with seven points from three games, ahead of Bahrain on goal difference.

The eight group winners advance to the third round of qualifying along with the four runners-up with the best records.