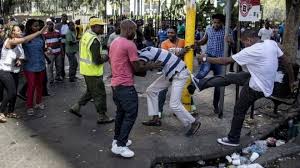 Following the escalation of xenophobic attacks on Nigerians living in South Africa, the federal government has summoned the country’s High Commissioner to Nigeria to a meeting.

The impromptu but planned meeting is scheduled for 11 a.m Tuesday morning and would take place at the Ministry of Foreign Affairs, Abuja.

“I am directed to inform that the Honourable Minister of Foreign Affairs has summoned the High Commissioner of South Africa for a meeting this morning by 11 am. You are therefore invited to cover the meeting,” the short statement inviting journalists to cover the event said.

However, further details have emerged about the latest attacks on Nigerians living in South Africa.

The latest xenophobic attacks on Nigerians was as a result of the clash between taxi drivers and drug dealers in South Africa.

The source also confirmed the media reports that the attack on the Nigerian embassy in South Africa was carried out by Nigerians who felt the embassy had not done enough to protect them and not by South Africans.

The source stated: “What happened was that there was a clash between taxi drivers and drug dealers in South Africa and in the process one of the taxi drivers was killed.

“One of the South African media outfits carried the news that the driver that was killed was killed by a Nigerian, because of that they started attacking and looting shops and property owned by Nigerians.

“The mission decided to salvage the situation by rescuing some and even taking some persons that took their property to the confine of the embassy.

Police chase close to 300 ‘zessers’ from a party in Sea Lots; one man arrested 0