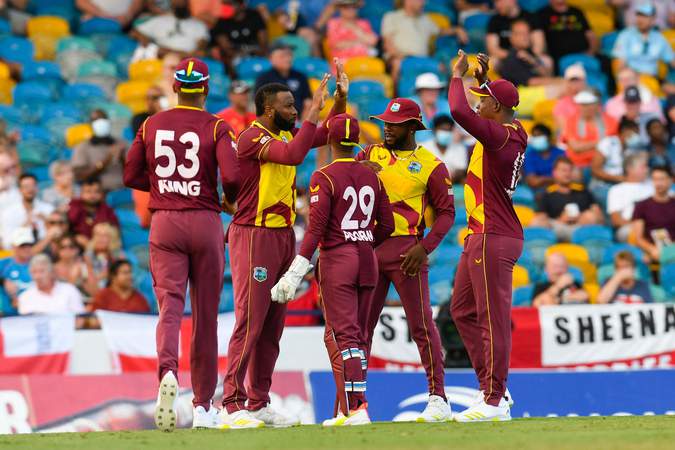 The Betway T20 International Series is set for an exciting finish when West Indies and England meet in the fifth and final match on Sunday. Led by a superb performance from skipper Moeen Ali, England won the fourth match on Saturday night. He topped another fine all-round showing from Jason Holder as the visitors won by 34 runs. The five-match rubber is now level 2-2. It has been an exhilarating series so far with colorful crowds turning out for every match and creating a carnival-like atmosphere. Each match has been memorable with 80 sixes being struck so far. This is an average of 20 sixes per match, and the record for 96 in a bilateral series (England v New Zealand in 2019) could be surpassed.

Set a victory target of 194, West Indies had a rousing opening stand of 64 between top-scorer Kyle Mayers (40) and Brandon King (26). Moeen then intervened and took 2-28, which earned him the Man-of-the-Match award. The off-spinner removed both openers in the space of 12 balls with five runs added. Holder smashed 36 from 24 balls but England held the West Indies batters in check, with just 40 runs from the last five overs.

“I thought we were in with a chance and even the way we started with the bat, I thought we had a very, very good chance,” said captain Kieron Pollard. “We sort of slowed up in the middle, not losing wickets, but we were a bit slow but these things happen. We were actually looking to eye up a 160, 170, a total that would’ve been chaseable, but they getting to 190-odd just put that extra 20 runs out of our reach.”

Moeen also showed his prowess with the bat as England lashed 75 from the last five overs to race to 193-6 off their 20 overs.The left-hander made 63 off 28 balls to provide the late momentum after opener Jason Roy laid the foundation with 52 from 42 balls and James Vince made 34 from 26 balls.

Tom Banton chipped Holder to mid-on for four at the end of the second over with eight runs on the board but Roy stroked five fours and three sixes as he put on 85 for the second wicket with Vince, who counted a pair of fours and sixes. England stumbled when both fell in successive overs, leaving the innings on 97-3 in the 13th but it was then Moeen exploded, lashing a four and seven sixes to inspire a 65-run fourth wicket partnership with Liam Livingstone (16). Holder took some punishment from the bat of Mooen but rebounded to fiish with 3-44. .

Left-hander Mayers, in only his third T20I, provided the perfect platform for the run chase, with two fours and four sixes in a 23-ball cameo, while King supported with four fours in a measured 27-ball knock. Nicholas Pooran hit one of the biggest sixes ever at the ground – a massive slog sweep which sailed 111 metres – but with his score at 22 he dragged a catch low to long on off Liam Livingstone’s off-spin.

Holder then counter-attacked, blasting two fours and three sixes in a 47-run, fifth wicket stand with Pollard (18 not out) but by the time Holder fell in the deep, the required run rate had skyrocketed to beyond 20..

The final match of this entertaining series is on Sunday. First ball is 4pm (3pm Jamaica/8pm UK).