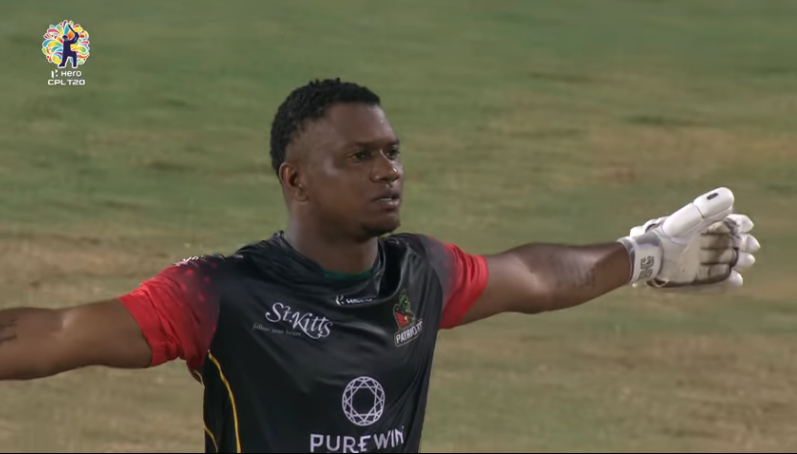 St Kitts and Nevis Patriots surged into the CPL semi-finals with a commanding run chase over Trinbago Knight Riders on the back of Evin Lewis’ thrilling 51-ball century.

Lewis, who was dropped on 29 in what was a poor bowling and fielding display from Knight Riders, plundered 11 sixes in a fantastic innings – the last of which over fine leg took him to three figures in what became the final over the match. It was his fifth T20 hundred and first since January 2019.

The result left Knight Riders second in the table, one of three teams on 10 points, heading into the final round of matches on Sunday and any of those teams could be in danger from Jamaica Tallawahs on eight points.

Offspinner Jon-Russ Jaggesar had struck crucial blows during Knight Riders’ innings including two in two balls to remove Colin Munro and Kieron Pollard just when they were looking to cut loose. Sunil Narine boosted the total with four sixes in his 18-ball 33, but the chase was soon put into context.

Chris Gayle, opening for the first time in the competition after Devon Thomas took a blow to his knee in the field, was dropped at deep point by Darren Bravo in the third over and by the time he edged behind to the final ball of the Powerplay Patriots had 67 on the board with the sixth over from Ali Khan costing 22.

Only Narine gave Knight Riders any element of control with the ball and Patriots knew they were so far ahead of the game they could play him out. Pollard brought himself on and should have had Lewis first ball but Akeal Hosein spilled the chance and though he then removed Thomas the over went for 20.

That was followed by Hosein’s night not getting any better when he was taken for 18 in the next and the required rate was well under a run-a-ball before the midway mark of the chase, leaving Lewis to add the memorable finishing touches.

Knight Riders had made a sluggish start with the bat; 12 had come from the opening over but by the end of the Powerplay they were 28 for 2 with Naseem Shah’s first two overs costing just five.

Munro and Bravo rebuilt and upped the tempo before Jaggesar pushed one through Bravo when he missed a pull. The 15th over really dented Knight Riders when Munro was superbly caught at deep midwicket and Pollard edged behind first ball where substitute keeper Joshua Da Silva held on with a juggle.

Narine struck two of his first three deliveries straight for six but the 17th over from Dominic Drakes (two runs) and the last from Naseem (eight runs) kept a lid on the scoring rate.