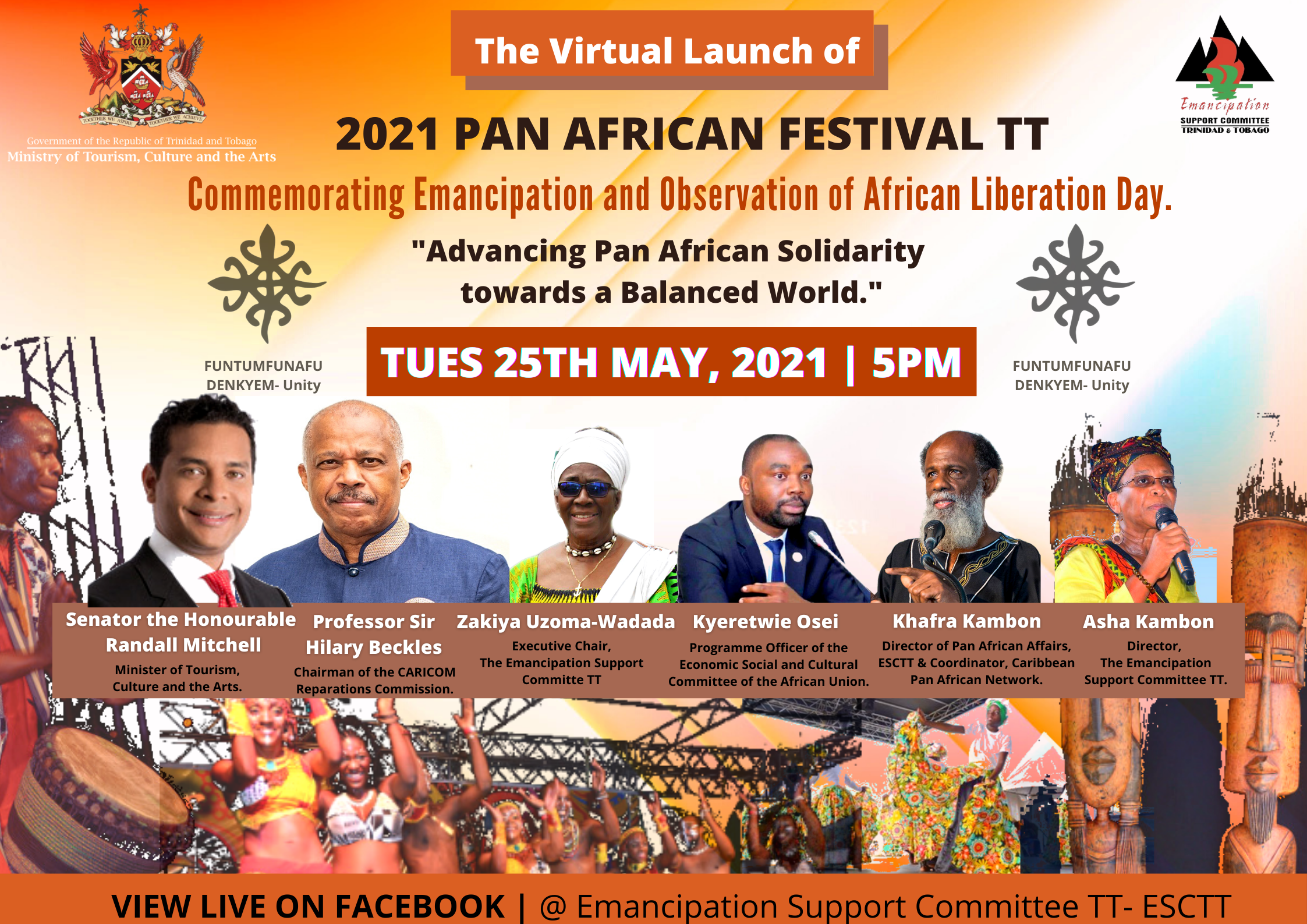 Minister of Tourism, Culture, and the Arts, Senator the Honourable Randall Mitchell and Professor Sir Hilary Beckles, Chairman of the Caribbean Reparations Commission are part of the special line-up of speakers who will participate in the virtual launch of the 2021 Pan African Festival TT Commemorating Emancipation and Observation of African Liberation Day.

The event will be broadcast on ESCTT’s Facebook Page, website, and You Tube Channel on May 25 at 5.30pm.

“In light of the challenging situation in Trinidad and Tobago, we thought it best to use our  experience gained from presenting virtual events last year  – to host the Launch of the festival virtually once again,” said Zakiya Uzoma-Wadada, Executive Chair of ESCTT. “We expect that  the Pan African Festival will still be a  thought-provoking moment  and  provide the national community and diaspora,  with an opportunity to celebrate the achievements of those who have gone before us as we confront the  threats posed by the pandemic .”

The theme for this year’s Festival is Advancing Pan African Solidarity Towards a Balanced World.

The ESCTT’s statement on the theme explains that, “Power relationships internationally are reflected in the bullying of non-white countries by wealthy and militarily powerful white countries, without UN approval and even without the sanction of the Security Council. Even as the world faces this devastating Pandemic there are cries of ‘vaccine apartheid’.

“Pan-Africanism is one of the ideological and action-inspiring responses to the unbalanced state of the world, which emerged over the last 500 years and it is in the DNA of our nation. Trinidad and Tobago has achieved international recognition in the Pan-African movement disproportionate to the size of its population and its landmass, with good reason.

“The First Pan African Conference was organized by a Trinidad and Tobago national, Henry Sylvestre Williams in 1900. Other Trinidad and Tobago nationals emerged as iconic figures of the movement, George Padmore and C.L.R. James among them. The country’s first Prime Minister, Dr Eric Williams was recognized within the movement for his scholarship, in particular his ground-breaking book, Capitalism and Slavery. Kwame Ture who popularized the term Black Power internationally emerged as another iconic figure of the movement. In Trinidad & Tobago Muzumbo Lazare, amassed signatures during the late 1890’s in efforts to pressure the local legislature to recognize August 1st, as Emancipation Day.”

“When we chose our emancipation theme for the year 2021, it was deliberately done to put a focus on those issues,” said Khafra Kambon, ESCTT’s director of Regional and Pan African Affairs.

“In Trinidad & Tobago our own African identity crisis is a major contributor to the minimal use of the opportunities provided by the decade. Ignoring this will lead to continuing and deepening imbalances nationally in a world where, despite our advances in many fields the pendulum is swinging against us and will continue to do so.”

Also speaking at the launch will be Kyeretwie Osei, Programme Officer of the Economic Social and Cultural Committee of the African Union who will deliver an African Liberation Day solidarity message.  Presentations will also be made by Kambon on this year’s theme and Uzoma-Wadada will provide details of this year’s virtual Festival. There will be pre-recorded performances of drums dance, pan, poetry, and song.

Man gunned down in Belmont 0

Hosein: Notwithstanding the current restraints, the spirit of Ramadan remains 0