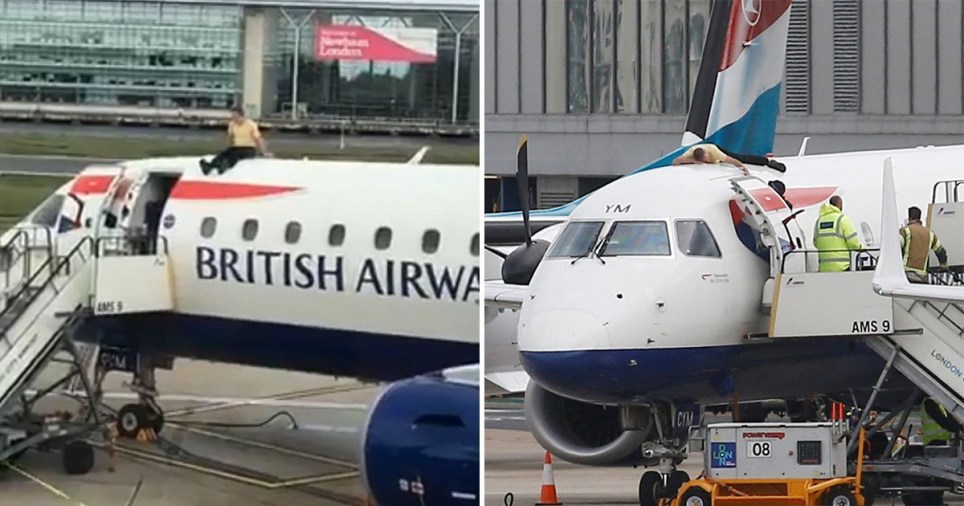 Environment Activist Climbs on to British Airways Plane before Take-Off

An environment activist climbed on top of a British Airways plane at London City Airport as part of Extinction Rebellion’s climate protest today. James Brown was taken on to the plane as a passenger and was the first person to board as he is partially sighted. He managed to clamber on to the top of the plane’s body before lying down on top of it. A video of his protest was streamed on the group’s Facebook page and ended after firefighters arrived to bring him down. James had booked onto a flight headed for Amsterdam.

James also streamed himself while sat on top of the plane.

‘This is all about the climate and ecological crisis, we’re protesting against government inaction on climate and ecological breakdown. They declare a climate emergency and then do nothing about it. ‘In fact they go the opposite direction, they sanction the expansion of airports, Heathrow, Bristol and others.

We can’t let this go on, we cant have our cake and eat it.’ He later noticed security were approaching and said: ‘Oh good security are coming.

I hope they don’t take too long ‘cos this is f****** scary. ‘I cant believe I managed to get on the roof. And its windy.’ He added: ‘This is for my kids. It’s for everybody’s kids. ‘It is for all young people who face a future of climate breakdown.’

The campaigner is a Paralympic cyclist who took bronze at the London 2012 Paralympic Games for Ireland in the cycling time trial. In 2016 he was banned from the sport for two and a half years for a doping violation.

As he was the first person to be brought onto the plane, no other passengers were on board, Extinction Rebellion said. The other flyers were being held in the terminal until James could be brought down. In an interview before his protest, he said he was taking part in protests for his children.

An Extinction Rebellion campaigner who streamed his action said, ‘We have to shout out loudly this cannot continue.’

British Airways owner IAG also pledged on Thursday to meet that emissions target, becoming the first major airlines group to make such a commitment. IAG said it would achieve its target with steps such as carbon offsetting for British Airways’ domestic flights from 2020, investing in sustainable aviation fuel and replacing older aircraft with more efficient jets over the next five years.

Britain has set a goal for a net zero carbon economy by 2050 and a United Nations objective to limit global warming to 1.5 degrees. But protesters say cheap and easy short-haul flying will make it impossible for Britain to meet its climate goals and will have dire consequences for the world.