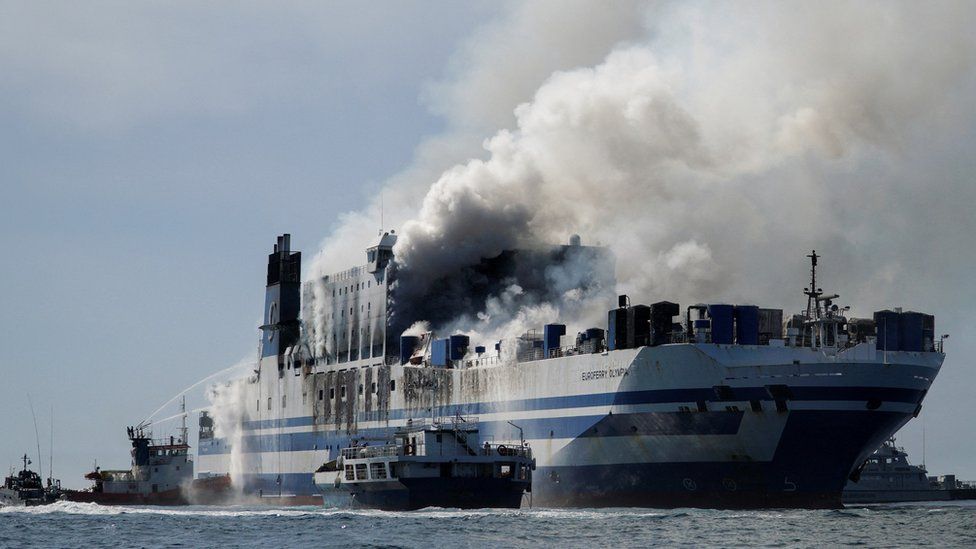 Eleven people are missing after a ferry burst into flames near the Greek island of Corfu on Friday, authorities say.

Rescue boats rushed to evacuate the 290 people on board the Euroferry Olympia, including two lorry drivers trapped inside the hold.

The ferry had left Igoumenitsa in Greece for the Italian port of Brindisi when a fire broke out on a car deck.

The captain told everyone to leave as the ferry was engulfed in flames and began billowing thick plumes of smoke.

The Greek coastguard said 239 passengers and 51 crew had been on the ferry, owned by Italian firm Grimaldi Lines. Most of the passengers were Italian nationals, according to Ionian islands governor Rodi Kratsa-Tsagaropoulou, while the crew were both Greek and Italian.

Italian officials said 277 of those on board were brought to safety and 10 of them were being treated in hospital for breathing problems and minor injuries. Hours later, rescuers managed to reach two men who were stranded in the hold and airlift them off the ship.

There was no word on the missing 11, but throughout the day officials have been trying to confirm how many people were able to leave the ferry when the order was given to abandon ship.

Zelensky calls for no-fly zone, more US help in virtual address to the US Congress 0