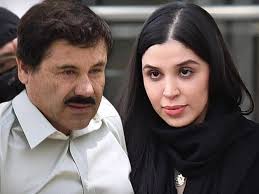 Emma Coronel Aispuro, the wife of the notorious Mexican drug lord Joaquin “El Chapo” Guzman Loera, was sentenced to three years in prison for aiding her husband’s operation while he was in custody.

The sentence imposed Tuesday by U.S. District Judge Rudolph Contreras in Washington was shorter than the four years that prosecutors had requested. the former beauty queen will also be credited with the nine months that she’s already been in custody.

According to The Seattle Times, she had faced a minimum of 10 years in prison, but was subject to a so-called “safety valve” provision because she had no criminal record, was not considered a leader and was not involved with violence.

Defense attorneys also pointed out she was a 17-year-old from an impoverished family when she met Guzman and married him on her 18th birthday.