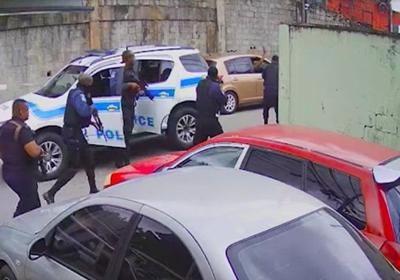 Eight police officers are set to be charged with murder in connection with the killing of three men on June 27th 2020.

According to reports the incident which took place in Morvant sparked a nation-wide protest.

Further reports according to the Newsday coming in on Monday states that Director of Public Prosecutions advised investigators to charge the officers with allegedly murdering the three men at 2nd Caledonia Road, Morvant.

The officers, a sergeant and seven constables, were detained by officers of the Professional Standards Bureau (PSB) and other officers last Thursday and Friday.

Officers shot and killed three men inside a car within the vicinity of Auto Guru.

One of the occupants of the vehicle exited attempted to run but was eventually shot by police officers.

38-year-old Joel Jacob aka Lion, was killed on his birthday along with his friends 46-year-old Noel Diamond and 27-year-old Israel Moses Clinton.

The back seat passenger was ordered out of the vehicle, searched and ordered back inside.

The man was allegedly told to roll down the back glass – officers reportedly opened fire killing all three occupants near the Auto Guru.

Days later after CCTV video of the killings emerged, which showed two of the men being shot with their hands in the air.

Ten police officers from the GEB and IATF, are also under investigations and face charges ranging from perverting the course of public justice, misbehaviour in public office and making false Station Diary entries.