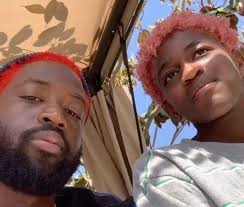 Dwyane Wade describes his daughter Zaya, who came out as transgender when she was 12, as “one of the greatest teachers of my life.”

In an Instagram live interview last Thursday with TODAY contributor Jill Martin, the retired basketball star talked about his upbringing, his NBA career and his efforts to be the best possible parent to his kids.

When Zaya first came out as transgender, Wade said he approached the news the same way he would if he needed to fix something in his basketball game. He asked for help.

Wade covers those pivotal moments of his life in his new photographic memoir “Dwyane,” which was released this week.

Loading...
Newer Post
Malcolm X daughter found dead in Brooklyn apartment
Older Post
Gary Griffith Should Be Made To Serve As CoP For The Next Three Year, Suggests Jack Warner

SOE regs: No drinking alcohol in public or exercise 0