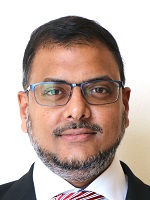 At last week’s cabinet reshuffle, Prime Minister, Dr Keith Rowley, indicated Nigel de Freitas will no longer serve as Senate Vice President as he had been made Minister in the Ministry of Agriculture, Lands and Fisheries with responsibility for Lands.

During announcements by the President, nominations for the Office of Vice President of the Senate were invited to which Leader of Government Business in the Senate, Dr Amery Browne and proposed Dr Ibrahim.

This announcement was then seconded by Mr De Freitas.

Following this process, Senate President, Christine Kangaloo, then made the official declaration.

Earlier in the proceedings, new Attorney General, Reginald Armour, also took his oath of office, along with Laurence Hislop, who was also appointed a government senator.

SEA postponement was the right decision to make, says NCPTA 0