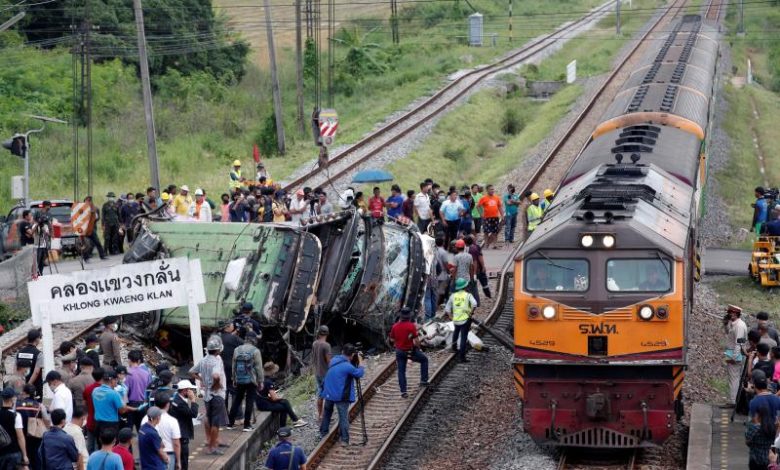 Dozens dead after bus collides with train in Thailand

A bus has collided with a train in Thailand, killing at least 18 people and injuring dozens more, officials say.

Thai police said passengers inside the bus were on their way to a temple to mark the end of Buddhist Lent.

Images from the scene show the bus upturned on its side, heavily damaged and objects scattered along the train tracks.

Rescue workers say they need a crane to be able to lift the bus.

There were 60 passengers travelling in the bus at the time of the crash, province governor Maitree Tritilanond said.

Traffic collisions are common in Thailand, with poor safety standards and busy roads thought to be key factors. A 2018 report from the World Health Organization (WHO) said Thailand had the second-highest traffic fatality rate in the world.

In March 2018, at least 18 people died and dozens wounded when a bus in north eastern Thailand swerved off the road and smashed into a tree.

At least three people were killed in 2016 when a train collided with a double-decker bus carrying tourists at an unguarded railway crossing west of Bangkok.

Consumers to pay more for flour from today 0