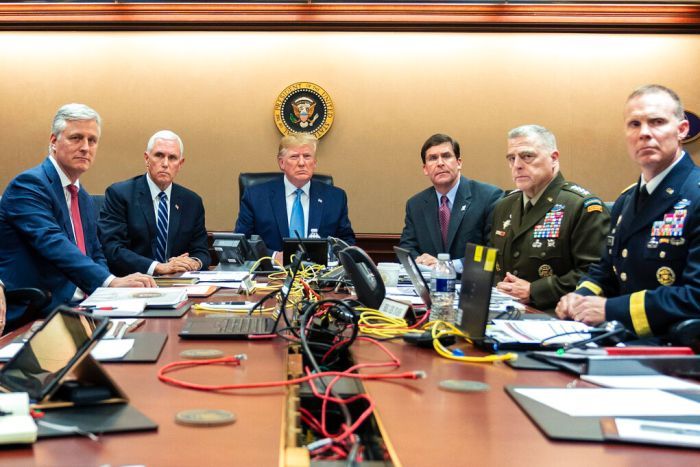 “This is the biggest there is,” Trump said at a White House appearance, reaching into his customary arsenal of superlatives after announcing the dramatic raid by special forces into Syria.

The raid was, by US accounts, a remarkable success of intelligence gathering, cooperation with multiple foreign powers in the Syrian war, and ruthless execution by helicopter-borne American soldiers. Trump threatened by a galvanizing impeachment threat in Washington and stung by widespread criticism of his overall Syria policy needs the victory to be his.

So amid a sometimes surprising level of detail in his account of the raid, the president shoehorned in plenty of politics lines that had less to do with counter-terrorism than they did with Trump’s need to boost Donald Trump.

It had to be bigger than the killing in a similarly daring raid in 2011 of Al-Qaeda founder and 9/11 mastermind Osama bin Laden. Perhaps that’s because bin Laden was killed under Trump’s predecessor, Democratic President Barack Obama.

“Osama bin Laden was big, but Osama bin Laden became big with the World Trade Center. (Baghdadi) is a man who built a whole, as he would like to call it, a country,” Trump said.

The 45th president has long struggled, politically speaking, with the mantle of the commander-in-chief.

He is dogged by his history of having avoided conscription along with many other young men of that generation – during the Vietnam War.

And his push to extract the United States from what he calls “stupid” wars in the Middle East and Afghanistan may be popular with many voters, but is seen as dangerously naive by the Washington elite, including much of his own Republican party. A recent abrupt decision to yank a contingent of US troops from a traditionally Kurdish area of Syria – giving Turkey a green light to attack the same Kurdish forces who had partnered with the US sparked especially deep anger.

The Baghdadi raid provides Trump with a perfect riposte.

Lindsay Graham, one of the senior Republican senators who lambasted Trump over the Kurdish controversy, was among the first to declare he’d seen the light.

“This is a moment where President Trump’s worst critics should say, ‘Well done,’” he said.

“What I see happening in Syria, makes sense to me,” he said.

“Now I understand what the president wants to do.”

It was a remarkable turnaround – and a boost for Trump’s chances that the Republican majority in the Senate will stick by him and refuse to convict on the Democrat-led lower house’s likely impeachment vote.

After being on the back foot for weeks – and with a potentially damaging week ahead in the impeachment saga – Trump again has a spring in his step.

He peppered his lengthy remarks at the White House with congratulations to himself in the third person.

He stated falsely that he was one of the first to predict bin Laden would become a problem, though he did write in his 2000 book “The America We Deserve” that the US was at risk of a devastating terrorist attack.

He referred to the Islamic State group’s successful use of social media for spreading its ideology, saying “they use the internet better than almost anybody in the world, perhaps other than Donald Trump.”

He mockingly threatened US allies in Europe over citizens who joined the Islamic State group and are now held a prisoner in legal limbo, with their home countries unwilling to bring them back.

“I’m going to drop them right on your border and you can have fun capturing them again,” he said. “They can’t walk back to our country. We have lots of water in between our country and them.”

The starkest evidence of his reinvigorated bullishness, though, was closer to home.

Trump announced that he’d told the Russians about the raid before it happened because the US raiders would need to cross Russian-controlled air space. He told numerous Republicans and administration officials of the heads-up.

But his impeachment foes the top Democrats in Congress, who are among the most senior figures in the country’s political hierarchy were kept in the dark.

“I wanted to make sure this kept secret.”

Game Warden charged with sexual penetration of a minor 0