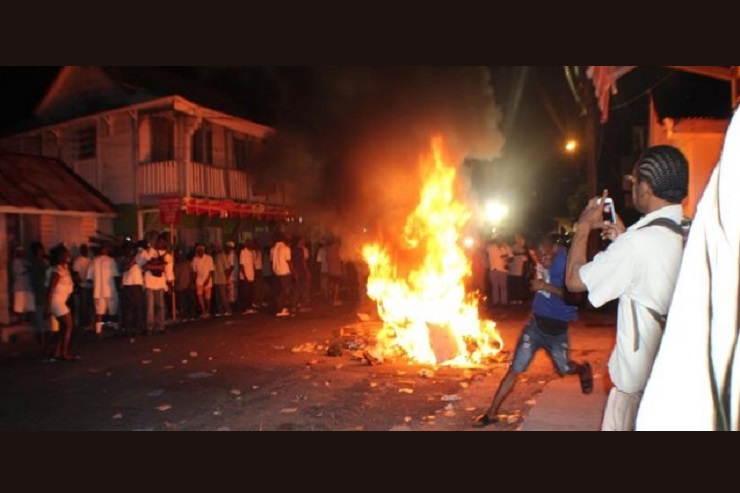 The leader of the main opposition United Workers Party (UWP), Lennox Linton, Monday maintained that the party would urge supporters to engage in civil disobedience if the Dominica government refuses to ensure there’s election reform ahead of the next general election.

In addition, Linton, who led supporters through the streets of the capital, repeated earlier calls for Prime Minister Roosevelt Skerrit to give an account to the nation over what he alleged to be the missing EC$1.2 billion from the treasury as a result of the sale of passports through the controversial Citizenship by Investment Programme.

Linton led supporters as he hand-delivered letters requesting President Charles Savarin and Police Commissioner Daniel Carbon to ensure a probe is conducted into the alleged missing funds under the CBI that allows for foreign investors to make significant financial contributions to the socio-economic development of the island in return for Dominican citizenship.

Linton also descended on the High Court building in the capital “to present notification of our pursuit of appropriate legal action to have the missing money deposited in the Consolidated Fund of Dominica”.

“We are gathered here this afternoon on the Bayfront in Roseau to bear eloquent testimony to the fact that Dominica is not prepared to go down the route where Dominica loses its right to decide who its government should be in free and fair elections,” Linton said..

“We will disobey any decision, any order, any attempt to place that responsibility in the hands of one man and his corrupt crew that insist on stealing elections through bribery, through cheating and stealing, we are in disobedience to that.

“That’s why we insist on electoral reform,” Linton said, calling for a clean voters list and identification cards for voters ahead of the general election constitutionally due by March next year, but widely expected to be held later this year.

Linton said that it was ironic that the government had invited a joint mission from the Guyana-based Caribbean Community (CARICOM) Secretariat, the London-based Commonwealth Secretariat and the Organization of American States (OAS) to examine the issue of electoral reform and in the end publicly indicate that it was not in agreement with the findings of the mission.

“The experts came they did their work and they advised us and he (Prime Minister Skerrit) is now saying that he will not accept the recommendations. Why, because he doesn’t want electoral reform,” Linton said.

Linton said that Skerrit cannot continue to blame the opposition for the failure to outline plans for the future direction of the country, adding “you cannot build a country like that.

“You cannot take Dominica forward calling the name of Lennox Linton every time you get and Lennox Linton has asked you where is the money (from the CBI),” he added.

Former prime minister Edison James, who also addressed the gathering, said that he wanted to “warn and advice” the authorities against holding the elections without ensuring there’s electoral reform.

He told supporters that Dominica faces the prospect of being blacklisted in the international community if elections are held without the necessary reform, making reference to the ongoing political and economic situation in Venezuela.

Verzuz’ to Return With T.I. vs. Jeezy Battle 0

Paramin man gets his 3D scan 0