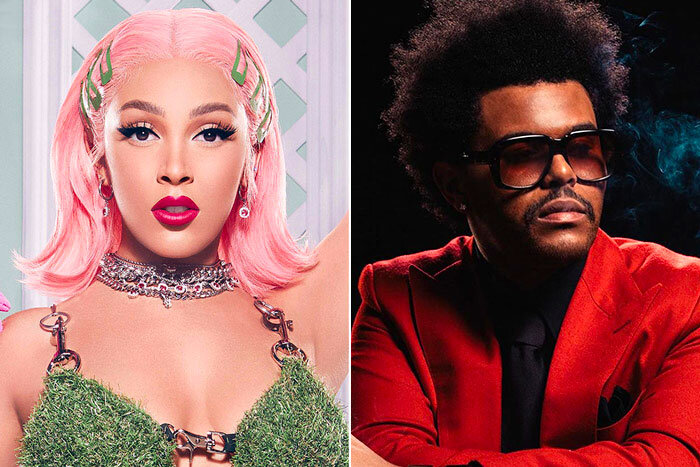 The return of Black Panther will see Doja Cat, The Weeknd, and Stormzy appearing on a soundtrack together for the Grammy-award winning film, which is currently in production.

According to NME sources, the artists have not tied down a contract, but they are in talks to write tracks for the second installation of the film. The film is reportedly in its final stages of production, as stated by Marvel this week that the film has “finalised the storyline so have started courting artists to start writing songs with it in mind.”

A number of artists have been named to be part of the music production, including s Giveon and Brent Faiyaz, and Marvel sources say that talks are also to include The Weeknd and Solange.

Previously, Tory Lanez was among the voices for the film, but it appears that he has been removed as one of the potential artists due to his criminal trial for allegedly shooting Megan Thee Stallion in August last year.

As for Doja Cat, she’s had one of the biggest years of her career and is said to be solid for her voice appearing in the soundtrack, a movie source said.

“Doja Cat is one of the artists who is in line to perform on the soundtrack because of her South African heritage. The Weeknd, Solange and Stormzy are also being considered as the producers want a wide range of smash hit artists to make this soundtrack bigger than the first,” said the unnamed source, according to NME.

The film, although not returning with the award-winning performance of Chadwick Boseman, who played T’Challa in Black Panther, went on to win a number of awards after being released.

At the 2019 Grammy’s, Black Panther won two awards- one for best rap performance and one for best score soundtrack for visual media. The soundtrack “King’s Dead” was nominated for several other awards.

The song was written by Kendrick Lamar, Jay Rock, Future, and James Blake, while Kendrick Lamar served as executive producer for the soundtracks of the film that also featured artists Schoolboy Q, 2 Chainz, The Weeknd, and Travis Scott.

In a new update, Boseman’s character will not be recast following the death of Boseman, who died while battling cancer. Many fans have called for his iconic role to be recast with his brother Derrick Boseman, but some are still skeptical as no one can play the role as Chadwick did.

“We have to figure out how to move this franchise on without that character because we all feel so much of T’Challa in the MCU on the screen is tied to Chadwick’s performance,” he said before adding that “the challenge for Black Panther: Wakanda Forever is telling a story without T’Challa.”

Derrick also spoke about Marvel’s decision not to recast the character sharing his own disappointment as he noted that “there’s so much power in seeing a Black king” on the screen and that by not recasting the character, Marvel is “depriving Black kids of a role model.”

While matters of representation are one issue, many fans of the film are still excited to see the storyline of Wakanda continue on screen.