Kylie Jenner and Doja Cat pulled out all the stops with their ensembles for Schiaparelli’s couture show at Paris Fashion Week.

The two stars attended the brand’s spring/summer 2023 couture show held in the Petit Palais in Paris on Monday. The collection designed by creative director Daniel Roseberry was inspired by Dante’s Inferno and featured gowns with extremely realistic recreations of a snow leopard, a lion, and a wolf, based on the three beasts that appear in the 14th century poem “representing lust, pride and avarice respectively.”

Jenner wore the same black velvet bustier dress featuring a life-size lion’s head to the event that model Irina Shayk wore down the runway, although the two heads had notably different facial expressions.

Meanwhile The “Say So” singer, 27, was completely unrecognizable in the front row of the Schiaparelli Haute Couture show during Paris Fashion Week Monday, having completely covered her bald and face and body in over 30,000 blood-red Swarovski crystals applied atop body paint.

The animal head Kylie Jenner wore was in fact hand-sculpted out of foam, hand-embroidered with wool and silk faux fur, and then hand painted to look as life-like as possible and achieve this uncanny valley effect.

This style however is not new to Hollywood when King Jaffe Joffer (James Earl Jones) in ‘Coming to America’ visited Queens in the first film, with Saul rubs in his lion-skin sash. 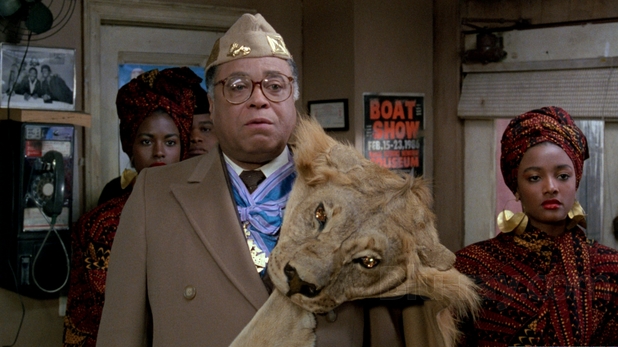